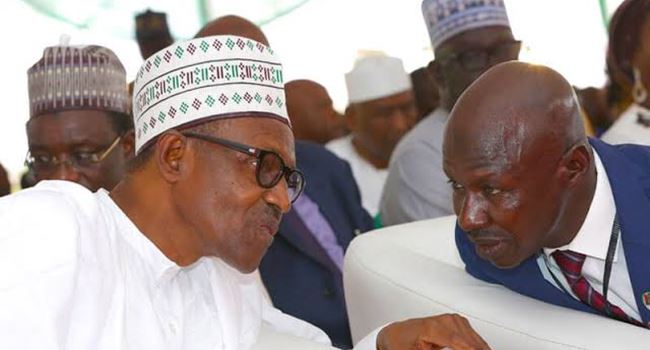 The President of the Senate, Ahmad Lawan, said on Thursday, there was no request before the 9th Senate for the confirmation of the acting Chairman of the Economic and Financial Crimes Commission (EFCC), Ibrahim Magu.

Lawan stated this when the Chairman of the Presidential Advisory Committee on Anti-Corruption (PACAC), Prof. Itse Sagay, paid him a courtesy visit at the National Assembly Complex, Abuja.

The 8th Senate had on March 15, 2017 rejected the nomination of Magu as the substantive chairman of the EFCC due to “damning” security reports against him.

Sagay had on Wednesday, made a case for Magu’s appointment as the substantive chairman of the anti-graft agency.

Speaking further on the matter, Lawan said “this is a new Senate and therefore, until there is a request to this Senate, there is nothing the Senate can do.”

“And I want to assure you that any request that comes from Mr. President is a request that will make Nigeria a better place in terms of appointments or legislation.

“And the Senate will act expeditiously to ensure that we play our part in the confirmation or passing of legislation appropriately.

“You have talked about passage of anti-corruption bills, you have come to the right place but you will also do your work.

“This is a new Senate. Going by our rules and I believe that goes for the House of Representatives too, any issue that was not concluded in the last National Assembly will have to start all over again.

“So, as far as we are concerned, those bills will have to come again and start to go through the process from the very beginning.

“We are ready, in fact, we are in a haste if those bills are ready for us to start working on them.”

Sagay said Magu had done magnificent work in the years he functioned in an acting capacity and if made substantive chairman, would be a good companion to the legislature in the fight against corruption in the country.

“We also want to bring before the Senate, some of the criticisms of the public in the area of oversight.

“There is this constant complain that members of committees demand some form of gratification before they would visit a place or write anything favourable about the Ministries, Departments and Agencies (MDAs).

“We appeal to the leadership to look into it and ensure that the oversight work of the Senate does not involve anything that will be described as extortion,” the PACAC chairman said.