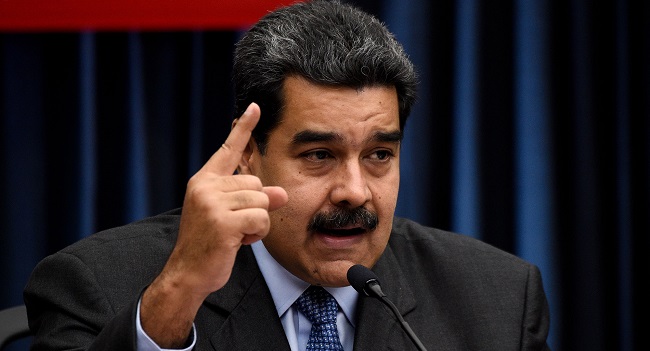 Hours after rejecting an eight-day ultimatum issued by the European Union to call for fresh elections, Nicolas Maduro, the president of Venezuela met members of the armed forces and monitored the display of military hardware.

Addressing soldiers in an appearance on state TV, Maduro asked whether they were plotting with the “imperialist” United States, which he accused of openly leading a coup against him.

“No, my commander-in-chief,” they shouted in unison, and Maduro responded: “We’re ready to defend our homeland – under any circumstance.”

“Nobody respects the weak, cowards, traitors. In this world, what’s respected is the brave, the courageous, power,” Maduro said.

“Nobody should even think of stepping on this sacred soil. Venezuela wants peace,” he said. “To guarantee peace, we have to be prepared.”

The EU had called for fresh elections, else opposition leader Juan Guaido will be recognised as the legitimate president.

Spain, France and Germany all joined in handing Maduro the ultimatum to recognise Guaido as Venezuela’s president unless Maduro calls for fresh elections.

Guaido, the 35-year-old head of the National Assembly, proclaimed himself acting president of Venezuela during massive street rallies this week and has called for more protests.

Maduro also described opposition leader’s declaration unconstitutional, but says he is open to talks with the US.