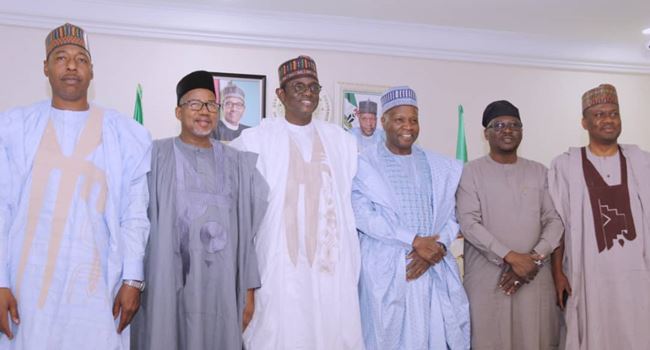 Governors of states in the North-East region on Friday rejected the 2021 budget proposal of the Federal Government over what it called the paltry allocation of N45.3 billion for capital projects in the region out of a total budget estimate of N13.02 trillion.

The governors, after a meeting in Yola, the Adamawa State capital, also alleged that the area had been short-changed in the proposed capital projects for 2021, calling on the National Assembly to review the budget in the spirit of equity and inclusion.

They also insisted that the paltry 0.35 per cent allocation to a region hard-hit by insurgency, other forms of insecurity and infrastructural deficit showed that it had been short-changed.

“This (budgetary allocation) represents a paltry 0.35 per cent of the proposed N13.02tn. This means that North-East is highly short-changed,” the governors claimed in the communiqué they issued at the end of their meeting.

According to them, the North-East region had been unfairly treated in the provision of road infrastructure by the Federal Ministry of Works and Housing, while also bemoaning the slow or outright non-existent progress on the pace of work on the roads already awarded and called for the immediate reactivation and review of the comatose road contracts in the sub-region.

They also decried the lack of budgetary provision in respect of the Mambilla hydro project in the 2021 budgetary proposals and called on the Federal Government to make the project a matter of serious priority by resolving all encumbrances around the project.

The communiqué read in part: “Forum critically examined the challenges of education in the sub region and resolved to adopt a regional approach by being deliberate on transforming education, especially at the basic level. Forum also agreed to form the North-East Council on Education.

“The forum said despite relative improvement in the security situation in the sub-region, the activities of Boko Haram, bandits, cattle rustlers and kidnappers still constitute a threat to sustainable development.”