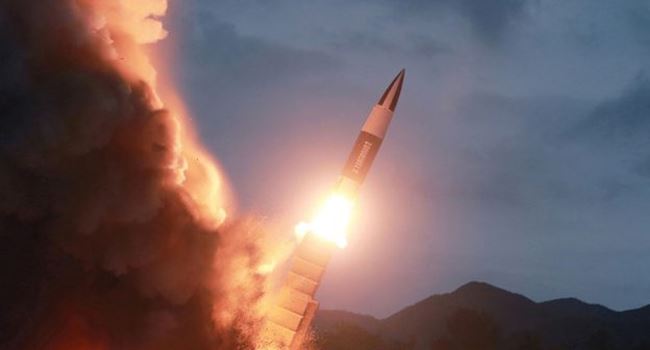 Pariah Asian nation, North Korea led by headstrong leader, Kim Jong Un has fired a sixth projectile this month as the world battles the coronavirus pandemic which has claimed many lives.

Japan’s Self Defense Force said in a statement Sunday that the missile had landed outside the country’s Exclusive Economic Zone, which extends 200 nautical miles from Japan’s shores.

“It is a serious issue for the whole international society including Japan that North Korea has repeatedly launched the missiles lately,” the statement said.

READ ALSO: US tells its citizens in Nigeria to get ready for evacuation amid COVID-19 spread

“We continue to put the utmost effort to collect and analyze information and vigilance to protect the life and property of Japanese citizens.”

According to South Korea’s Joint Chiefs of Staff, two “short-range projectiles” were launched from the coastal Wonsan area on Sunday, and flew 230 kilometres (143 miles) at a maximum altitude of 30 kilometres (19 miles).

“In a situation where the entire world is experiencing difficulties due to COVID-19, this kind of military act by North Korea is very inappropriate and we call for an immediate halt,” the JCS said in a statement, according to Yonhap news agency.

Both South Korea and the US also acknowledged the launch, but were unable to confirm what type of projectile was fired, other than that it was short-range. Japan said it was “seen to be a missile.”