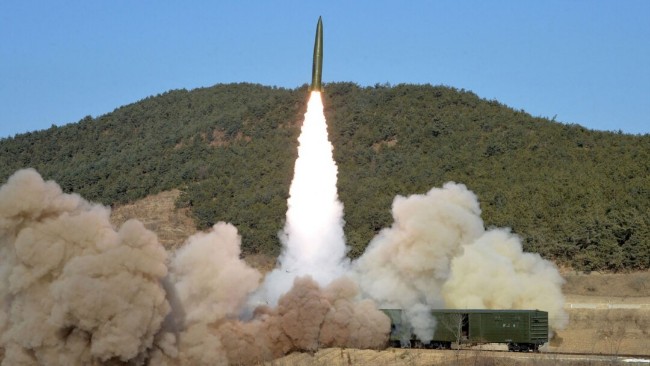 Yeol, a conservative politician, had, during his campaign, promised to take a hard line against Pyongyang, which seemed to have angered his northern counterpart, Kim Jong-un.

The South Korean military in a report, said North Korea tested what is believed to be a submarine-launched ballistic missile (SLBM) off its east coast at about 05:07 GMT on Saturday from Sinpo, where Pyongyang has a major shipyard.

Japan’s defence ministry also corroborated the launch in a statement, saying the projectile could be a ballistic missile.

The missile, according to the Japanese military, landed outside Japan’s exclusive economic zone, adding that Japanese Prime Minister Fumio Kishida has ordered officials to prepare for all “unforeseeable situations” and secure the safety of aircraft and ships, but there were no immediate reports of damage.

Read also :North Korea warns South it would use nuclear weapons if threatened

The launch was North Korea’s first demonstration of an SLBM since October last year when it test-launched a new short-range missile from the 8.24 Yongung – its only known submarine capable of firing a missile.

Just on Wednesday, North Korea had fired a ballistic missile towards the sea off its east coast after Jong-un threatened to unleash its nuclear forces “at the fastest possible speed”.

Last month, Jong-un had pledged to speed up development of his country’s nuclear arsenal when he presided over a huge military parade that displayed intercontinental ballistic missiles (ICBMs), as well as what appeared to be SLBMs being carried on trucks and launch vehicles.

Related Topics:MissileNorth Korea
Up Next