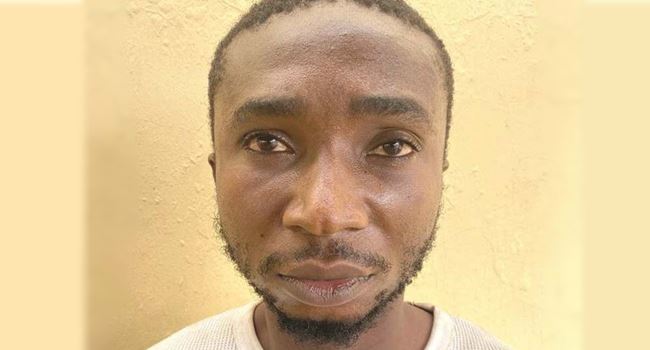 A staff of the National Open University of Nigeria (NOUN), Iko Danasabe, has been arrested by the Benue State police for allegedly killing his colleague, Francis Atache, over a debt of N70,000.

Danasabe, a senior clerk at the Makurdi centre of NOUN, had reportedly connived with some cult members to kill Atache, also a clerical official at NOUN, and dumped his corpse in a bush.

Vanguard reports that police in the state reported that Danasabe who was into a contribution scheme with the deceased, had given Atache the sum of N70,000 to help him deposit with the thrift collector but Atache was said to have failed to deposit the money and refused to return it to Danasabe.

After several attempts to get him to refund the sum, Danasabe allegedly engaged some suspected members of a cult group which he belonged to and waylaid Atache at a smoking joint.

The gang reportedly hacked Atache to death and disposed of his body in a bush close to the joint. His body was discovered a few days later after some passersby perceived a foul smell from the spot and alerted the police who removed the corpse and commenced investigations which led to the arrest of the suspect.

Danasabe was arraigned at a Makurdi magistrates’ court on Friday and was remanded in a correctional centre.

In his confessional statement to the police, Danasabe admitted to have orchestrated an attack on Atache but said he did not intend to kill him.

“I am a staff member of NOUN, Makurdi branch. I started working with NOUN five years ago. I started as a senior clerical officer. I used my diploma to apply for the work but I now have a BSC in public administration.

“Francis (Atache) was a junior clerical officer and worked under me. If I generate data for students to pay their school fees at the bank, I usually gave him the money to help me pay.

“So, sometime in June 2020, I was preparing to go to Nasarawa and gave Francis my monthly N70,000 contribution for a thrift scheme organised by one Alhaji. I told him that if he paid the money, they would give him a paper which would serve as a receipt and the payment would reflect in my balance.

“When I returned from the journey, I asked Atache for the receipt and he promised to bring it to the office the following day. But when he came the next day, he gave me some baseless excuses. I later reported the matter to his elder sister who works in the same office with me and she promised to get Atache to bring the receipt.

“But when I did not hear from his sister after two days, I reminded her and she blamed me for entrusting Francis with money. He started threatening me with a gun; I even reported the matter to our boss and told him that if he wanted to do a confraternity war, he should let us do it outside the office.

“Later I reported the case to the vigilantes in our area and he begged me to give him two days. The two days elapsed and extended to a week. I reported him to the vigilantes again. Francis then challenged me to bring a proof that I gave him the money and vowed that he was not going to pay.

“I was bitter because I knew at that point that he was not going to give me the money. I contacted my cult members and asked them to monitor his movement. There is a joint near one Bishop’s farm where we normally go to smoke and relax.

“On that day, I confronted him with the issue and my boys asked him to surrender the money he had with him but he refused. He had more than N70,000 on him which he wanted to use to buy weed in bulk. He sold weed to boys in the town. Meanwhile, while we were coming, I brought an axe and the other came with their guns.

“When he refused to surrender the money, we started fighting. He stood up and came after me, my boys hit him with a stick from the back and he fell down. He started bleeding and stopped moving. Everyone was terrified and ran away from him. I ran home and took some of my clothes and left my house.

“I got information that the police found the body. We did not hide it. Unfortunately, I was found and arrested. I did not expect him to die like that. After some days in police detention, I was remanded in prison. I claimed to be innocent. I was shocked when the police came and picked me. They had arrested some of the boys who witnessed the incident. I had no choice but to tell them the truth.

“I only wanted to scare him but he died in the process. I am not the one who hit him with the stick but I pinned him down on the floor while my guys were beating him up.”