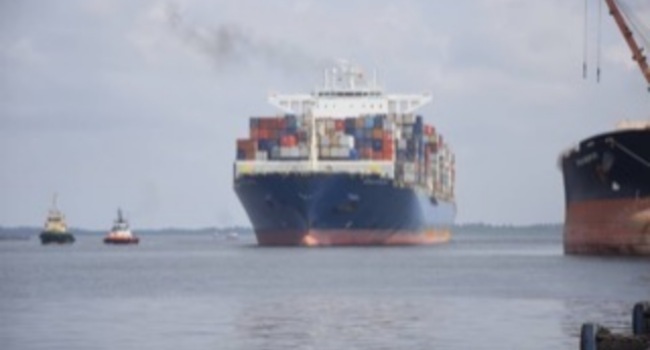 The Nigerian Ports Authority (NPA) has announced the berthing of the largest container vessel to ever dock at a Nigerian port.

Jatto Adams, General Manager, Corporate and Strategic Communications said in a statement signed by him in Lagos that the Maerskline Stardelhorn vessel, measuring 300 metres in length and 48 metres in width, was received at the Federal Ocean Terminal, Onne in Rivers State at 16:20 hours on Saturday 15th August.

The vessel has a capacity of 9,971 (TEUs) and is a flagship from Singapore, Mr Jatto said.

The vessel was brought in from Fairway Bouy Bonny with the support of three Tugboats run by three of the agency’s captains and was received by the ports manager of Onne Ports, Alhassan Abubakar.

“The Authority is delighted to state that the landmark arrival of the biggest gearless Maerskline vessel at the Onne Ports is a result of management’s determination to improve the patronage of the Eastern Ports.

“It is an indication of the fact that the Eastern Ports are equipped to receive all manner of vessels and an expansion of the options of consignees in the Eastern and northern parts of the country.’”

The NPA management congratulated its team at the Onne Ports and all stakeholders at the ports for their cooperation towards ensuring that the vessel berthed successfully without hitch.

“The authority assures of its commitment to ensuring that all ports locations in Nigeria work at their optimal capacity and the repositioning of Nigerian ports as the hub in the sub-region,” the statement said.

A Northern governor as commander of Boko Haram?