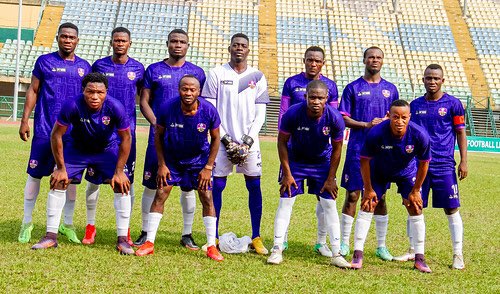 Kwara United put up a fine performance in Lagos on Sunday as they bagged an away victory over MFM in the Nigeria Professional Football League (NPFL).

The Ilorin-based club edged their hosts 2-1 after they raced into a two-goal lead courtesy of goals from Junior Lokosa and Alao Danbani.

MFM picked up a consolation through Elijah Akanni as it was not enough to earn them at least a point from the encounter.

Elsewhere, Remo Stars kept pace with the frontrunners in the league by thrashing Sunshine Stars 3-0 in Ikenne.

Andy Okpe scored a brace, while Seun Ogunribide was also on target for Gbenga Ogunbote’s side.

Holders Akwa United were held to a goalless draw by Abia Warriors at the Umuahia Township Stadium.

Enyimba fell to a 2-0 defeat against Dakkada in Uyo, where Edidiong Ezekiel and Aniekpan Ekpe were on target for Dakkada.

Mark Daniel opened scoring for the hosts in the first minute, while Ifeanyi Eze added the second four minutes before the break.