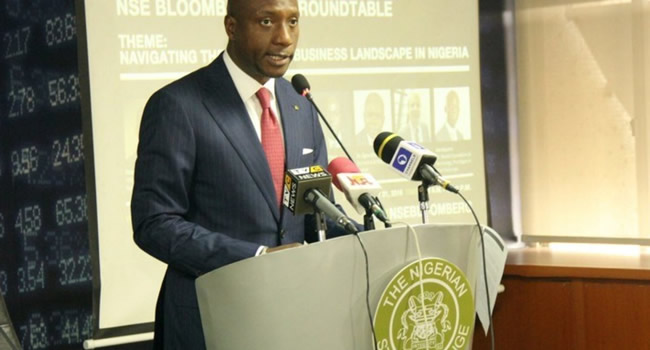 Less shares were sold at the Nigerian capital market this week as the number of deals were cut down, but the value was higher compared to that of last week.

In a market data from the Nigerian bourse, a total of 1.058 billion shares valued at N12.831 billion, were exchanged in 17,854 deals this week by investors on the floor of the Exchange.

Majority of this week’s investments went into the Financial Services Industry by measure of volume. It led the activity chart with 714.677 million shares valued at N5.951 billion traded in 9,718 deals.

The companies that enjoyed the highest volume of investments are Zenith Bank Plc, Sterling Bank Plc and Fidelity Bank Plc, as the three lenders accounted for 261.344 million shares.

This investment is worth N2.712 billion, and was done in 2,862 deals, which means they contributed 24.70 percent and 21.13 percent to the total equity turnover volume and value respectively.

Cutix topped the gainers list at the end of trading this week after its stock value rose by N0.53kobo within five days, to push its share price to N2.78kobo per share from the week’s opening of N2.25kobo.

Okomu Oil Palm’s stock value was up by N20 as the share price ended the week with N116.50kobo against the N96.50kobo it opened with.

Morison Industries closed the week with N1.24kobo per share after gaining N0.11kobo to move above its opening of N1.13kobo per share.

Conoil was part of the gainers list as its stock price rose by 9.63 percent to move from its opening of N18.70kobo to end the week with N20.50kobo per share.

PZ Cussons gained N0.50kobo during the week as its share price rose to N6 per share against the N5.50kobo that it started this week with.

Top losers of the week

CWG topped the losers list following a loss of N0.40kobo, which reduced its stock value to N1.13kobo at the end of trading, from N1.53kobo.

FTN Cocoa’s share price dropped to N0.33kobo by end of trade this week, having lost 15.38 percent from its opening share price of N0.39kobo.

Juli share value also fell during the week, losing N0.15kobo from its opening stock price of N1.51kobo, to end trading with N1.36kobo per share.