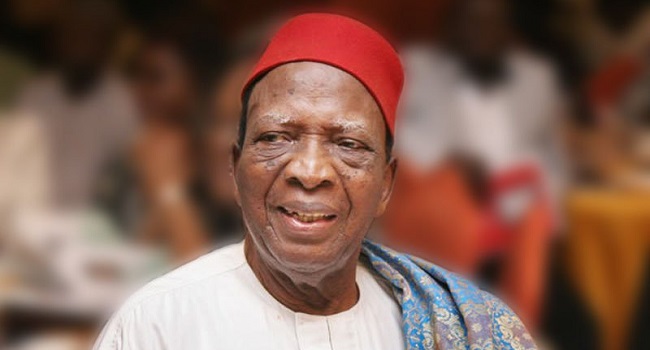 Nwabueze, a constitutional lawyer and elder statesman had faulted the decision of the apex court to dismiss Atiku’s appeal.

He had among others suggested that the decision of the apex court to dismiss the PDP presidential candidate appeal was predetermined ahead of the October 30 sitting of the court.

But in a statement on Wednesday, Keyamo said Nwabueze’s position on the judgment showed he had allowed his emotion to override his sense of decorum and professional etiquette.

He said: “Unfortunately, in the said press statement last week, Prof. Nwabueze took his political conviction too far by seeking to destroy the reputation and integrity of the Supreme Court on the altar of politics.

“He let his emotions override his sense of decorum and professional etiquette – something totally unexpected of such revered figure in the legal profession.

“In the said press statement, Prof. Nwabueze, delved into the practice and procedure of the apex court in hearing and determining time- bound appeals and the propriety or otherwise of same when viewed in the light of the provisions of Section 36(1) of the Constitution of the Federal Republic of Nigeria, 1999.

“Prof. Nwabueze’s submissions contain deliberate misinformation (given his pedigree) which become magnified when viewed vis-à-vis the provisions of the law, the settled decisions of courts and the precedents already long established by the apex court.”

On the apex court position that it would give reasons for its decision on the appeal at a later date, Keyamo, said was not the first time the Supreme Court did that.

He added: “Prof. Nwabueze’s assertion that the Supreme Court went on a recess on the 30th of October, 2019 during the hearing of the Presidential Election Petition appeal whereupon they reconstituted the panel is, simply put, not correct.

“The purpose of that recess was, as widely reported, to enable the counsel to the Appellant decide on consolidating the seven interlocutory appeals with the main appeal pursuant to an application by the Appellants’ lead counsel who asked the court to allow all counsel to adopt their briefs, both in the main appeal and in seven other interlocutory appeals.

“Finally, rather than crucifying my lords at the apex court for hearing the appeal on the 30th of October, 2019 and deciding same on the same date, my lords ought to be commended for coming to court prepared and hearing and dismissing the appeal with dispatch.”