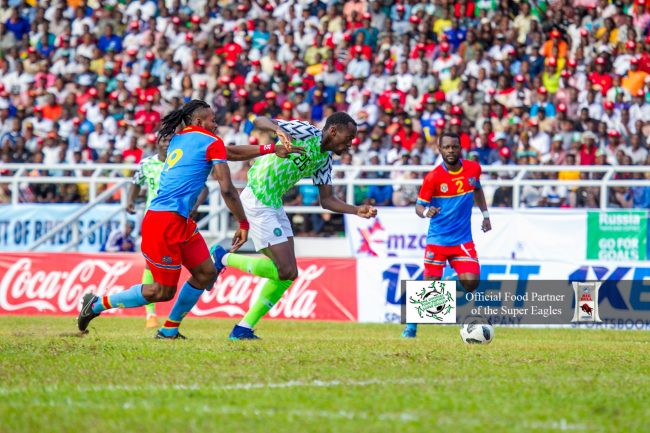 Simeon Nwankwo and Junior Lokosa made their international debuts as the Super Eagles of Nigeria drew with the Democratic Republic of Congo in an international friendly in Port-Harcourt on Monday evening.

The Crotone and the Kano Pillars forwards were included in the 30-man provisional World Cup list of the national team, and were given the opportunity to prove their worth in the friendly.

Defender William Troost-Ekong made the difference in the first half when he scored in the 14th minute, but DR Congo converted a penalty to make it 1-1 in the second half at the Adokiye Amasimaka Stadium.

The Bursaspor defender, who was making his 19th international appearance for the Super Eagles, was voted man of the match after putting up a sterling performance.

Nigeria Profeasional Football League top scorer, Lokosa was involved in the goal that put Eagles ahead in the first half but made way for Ahmed Musa in the second half.

DR Congo gave the Eagles a good fight, as Cedric Ngulubi ensured the central African nation earned a share of the spoils when he converted a penalty in the 78th minute to bring both sides level.

The friendly serves as a farewell game for the Eagles who have two more games to play outside the shores of the country in preparation for the World Cup.

The team are billed to play England on Saturdyay and Czech Republic four days after, before jetting out to Russia for the global showpiece.

Nigeria have been drawn in Group D to face Croatia, Iceland and Argentina in the group stages of the 2018 finals.