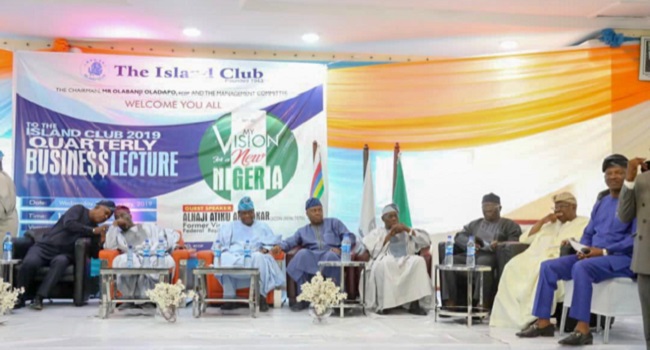 Obasanjo, who had consistently dubbed Buhari incompetent and asked Nigerians not to re-elect him as president, on Wednesday launched a fresh attack, describing Buhari’s acclaimed integrity and morality as fake.

He said, “The self-professed integrity and morality of President Muhammadu Buhari are fake, his actions and inactions have exposed him.”

The former president spoke at the Island Club 2019 Quarterly Business Lecture held in Lagos, where he described the presidential candidate of the Peoples Democratic Party (PDP), Atiku Abubakar, as the right man to take Nigeria out of its current state.”

Obasanjo at the event declared that he will never regret forgiving Atiku, adding that anyone who will refuse to forgive his offender who sought for forgiveness is never a true believer.

He said, “Atiku never claimed to be a saint and I never described him as such. I will never so describe any human being alive let alone calling him a Messiah.

“On an occasion in the past when I said that someone was not a Messiah, some Nigerians out of bad belle were up in arms. For me, as a Christian, the only Messiah I know and have is Jesus Christ and even then, the man aspect of Him was imperfect while the divine aspect of Him was perfectly messianic.

“I must reiterate that Atiku is not a saint and who is? But from what I know of Atiku, he will be a performer in all respects. I can say that again from my personal experience.

“A leader must be honest to himself and to the people he serves or he wants to serve. He must identify and acknowledge his situation, mistakes, shortcomings and inadequacy; show remorse where and when he has erred, seek forgiveness and repent; and not passing the bulk or keep blaming others and fail to accept responsibility.

“Atiku accepts responsibility for his mistakes, shows remorse and seeks forgiveness from his political party and subsequently from Nigerians. He asked for forgiveness from me and as a believer, a Christian as such, I forgave him in accordance with the teaching and instruction of my Saviour.

“If anybody blames me for forgiving Atiku, I leave such a person with God Almighty, especially as both Christian and Islamic clerics joined Atiku to visit me to seek forgiveness. Anybody who does not forgive when forgiveness is sought with contrite heart cannot be a true believer and should not expect the forgiveness of God.”

If we are too weak to punish Obasanjo, history will punish him –Oshiomhole