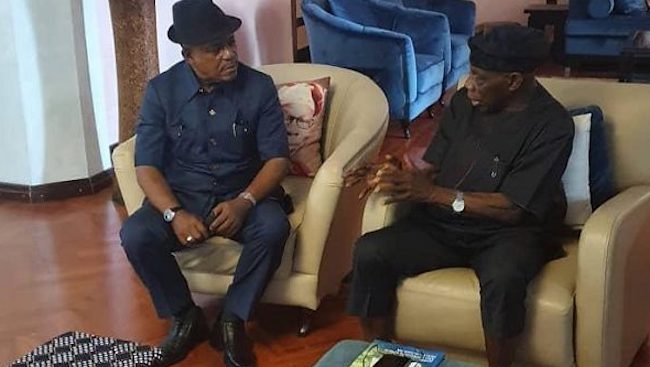 Secondus, who just survived a plot to remove him as chairman of the major opposition party, arrived at the penthouse of the Olusegun Obasanjo Presidential Library (OOPL) in the Ogun State capital at about mid-day on Thursday.

He was accompanied on the trip to the ex-President’s home by some members of the PDP National Working Committee (NWC).

They immediately went into a private meeting that lasted a few hours with Obasanjo.

Although issues discussed at the meeting had not been made public, it may not be unconnected with the leadership crisis in the PDP.

Some members of the party had demanded the removal of Secondus over his poor handling of the party’s affairs.

This followed the resignation of seven members of the party’s NWC about three weeks ago.

Governors elected on the PDP platform and the party’s Board of Trustees (BoT) quickly intervened and nip the crisis in the bud.

At a meeting held last Tuesday in Abuja, the PDP stakeholders resolved to push forward the party’s national convention by two months in a bid to placate anti-Secondus forces in the party.

The tenure of the current NWC will end on December 6 and the party’s leaders had agreed to organize the convention in late October.