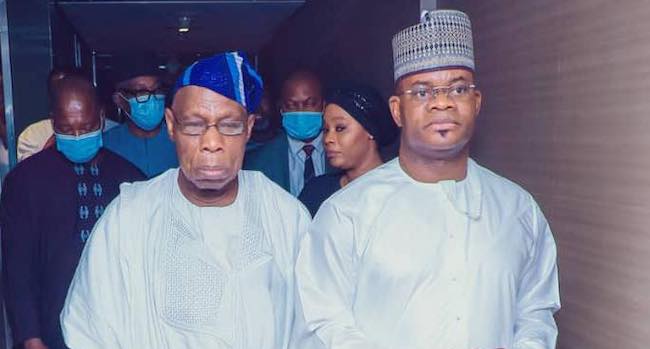 The Chief Press Secretary to the governor, Mohammed Onogwu, who disclosed this in a statement on Sunday night, said the duo held a closed-door meeting and discussed the country’s security challenges and other major national issues.

The ex-President, according to the statement, advocated youths’ involvement in governance.

He also urged Governor Bello to sustain efforts at improving security in the state.

The statement read: “Former President Obasanjo noted that the fight against insecurity should have everybody on board and stressed that governors should involve everyone to ensure insecurity is curtailed in Nigeria.”

“He also commended Bello for his developmental efforts in the state especially in the areas of youth and women inclusion in politics and governance, infrastructure, health, and education.

“He charged Governor Bello to continue to be an advocate for youths’ involvement in governance.

“The governor thanked Obasanjo for his statesman’s role, fatherly disposition, and wealth of wisdom which the young leaders are privileged to tap from.”

Related Topics:#featuredObasanjoYahaya Bello
Up Next