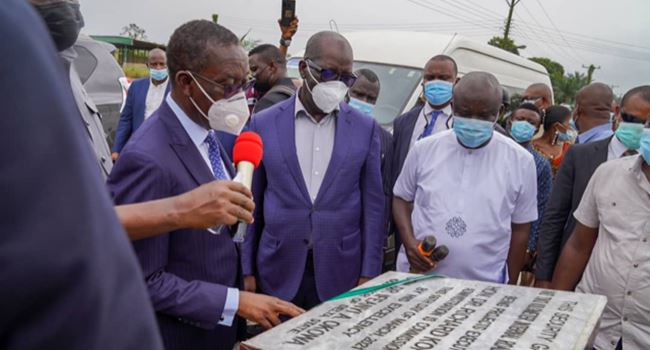 Governor Godwin Obaseki of Edo has called for the upward review of the current 13 per cent derivation formula to oil-producing states.

Obaseki made the call on Tuesday, March 16, shortly after inaugurating the Effurun-Otor-Ovwor-Olomu bridge and the rehabilitated 34-km Otu-Jeremi-Okwagbe Road in Ughelli South Local Government Area of Delta.

The governor said that the current 13 per cent allocation by the Federal Government was inadequate for the development of the Niger Delta.

He also noted that the terrain in the South-South had made it quite expensive to develop infrastructure, especially roads.

Obaseki commended his Delta counterpart, Ifeanyi Okowa, on the number of projects being executed in the state.

He said Okowa would do better if more funds were made available to the state.

Obaseki said that the inaugurated bridge and road projects would enhance the economy of the communities and also connected them to other parts of the state.

Obaseki pledged the sustenance of the age-long relationship between Delta and Edo, assuring that he would invite Okowa to inaugurate projects in Edo very soon.

In his remarks, Okowa said that the Effurun-Otor-Ovwor bridge was one of the major demands of the people when he visited the communities in 2015.

He said that the vision of his administration was to connect Delta communities with roads, bridges, and other basic amenities.

Okowa added that his administration had awarded no fewer than 500 road projects with many already completed.

Related Topics:#featuredEffurun-Otor-OvworObasekioil producing states
Up Next