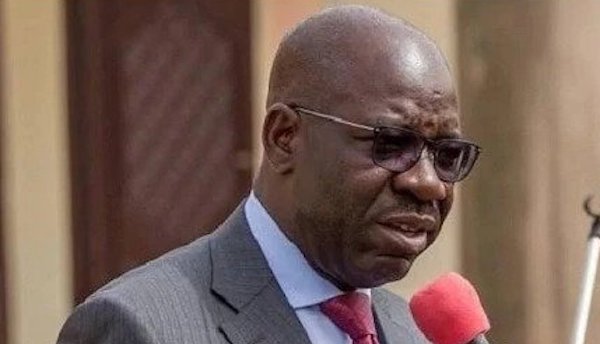 This year’s Democracy Day celebration seems to have given birth to another “beautiful bride” in the nation’s political space as political parties continue to woo Governor Godwin Obeseki to join their party in order to realise his second term governorship ambition after being screened out of his party governorship primaries due to an alleged discrepancies in the certificates submitted to the party.

The screening committee of the All Progressive Congress (APC) led by Professor Jonathan Ayuba had on 12th June, 2020, disqualified Governor Obaseki and two others from contesting the party governorship primaries slated for June 22nd, because of the discrepancies in the certificates tendered to the party. The same position affirmed by the party Appeal committee headed by Prof. Abubakar Fari day later.

This disqualification turned the Governor to a “beautiful bride” that the majority of the parties in the State want in their party. For instance, the National Publicity Secretary of Action Democratic Party (ADP), Mr Adelaja Adeoye, stated on June 14, that the party will grant the governor waiver if he defected to the party to pursue his second term ambition.

Similarly, few hours after the disqualification, the Former Vice President, Atiku Abubakar, and the presidential candidate of the People Democratic Party (PDP) in the last presidential election promised to create soft landing for him in PDP should in case he defected to the party.

Before then, the National Chaiman of the PDP, Prince Secondus had stated that the door of the party is open to the governor though he didn’t promise him automatic ticket because he did not want to impose candidate on the people of Edo State.

Similar statement made by Pa Edward Clark who described the situation as a golden opportunity for the PDP to take over the State from APC because the governor has done well and he should be given opportunity to continue his good work.

The same commendation was echoed by the Progressive Governor’s Forum (PGF) during a visit to the National Leader of APC, Asiwaju Bola Ahmed Tinubu while trying to resolve the dispute between the National Chairman and the Governor even before the formation of the committee that finally disqualified the Governor.

Adams Oshiomhole, had during the inauguration of the committee expressed doubt over the authenticity of the first-degree certificate presented by the governor. This statement drew the University of Ibadan, where the Governor graduated from into the long time battle between the duo.

The management of University through its Registrar, Olubunmi Faluyi, said that the governor graduated from the institution in 1979 and his records are intact in the archives of the University. The same position repeated days later when the Appeal committee alleged that the Governor’s certificate contains two dates.

However, this seems to be funny but at the same time it calls for serious attention especially, considering the number of established cases where people have acted in dubious manner to create two certificates for themselves. Though, the way the Governor was disqualified shows that there is more to the issue than the certificate.

Infact, the governor had in a statement made immediately after the screening process stated that he did not expect justice from the committee because of certain questions asked during the exercise.

Months before the screening, the Governor had publicly supported those that wanted to remove Oshiomole as the National Chairman of the party before he was reinstated by an Appeal Court in Abuja. Though, he has now been suspended based on the judgement delivered by Justice Mohammed Lamido led panel on June 16.

This might have intensified the struggle of the chairman to delist the governor from the upcoming Governorship race. Though, the struggle to stop the governor from his second term ambition started before the 2019 general election. Infact, it was this tussle that snowballed to the inauguration of less than half of the elected members of the State House of Assembly in the night in 2019, which has since then paralysed the legislative function.

Infact, the crisis at the legislative quarter was so serious to the extend that at a point the National Assembly threatens to take over the legislative function of the state. This move and counter move at the State level led to the formation of resolution peace committee by the party but was rejected because of the fear of unknown from the camp of the Governor.

Since then, all efforts to pacify the camps and return the State to the path of peace have continue to suffer defeat as it appears they have graduated to the level of “Mutual Assured Destruction” (MAD) where they are no more concern about the implications of their action on the people in the State and it’s place in history.

Now that it is obvious that the governor can no longer contest on the platform of the APC as the “beautiful bride is on his way to the house of another groom”. The onus is now on the new groom (party) to check all that is checkable so that the party will not act on emotions and sacrifice the mandate of the people on the alter of technicality.

The African knee on African Americans

‘No fans, no mixed doubles’ – US Open to hold after New York gov gives go-ahead