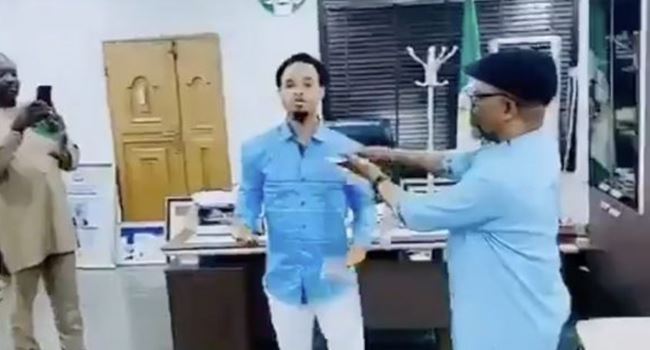 Prophet Chukwuemeka Ohanaemere, popularly known as Odumeje, is the charismatic leader of the Mountain of Holy Ghost Intervention Deliverance Ministry based in Onitsha, Anambra State. Though he is said not to be from Anambra state he chose the eastern commercial city as his base given the majority Christian population living there. The mercurial preacher was a nonentity years ago until he went to the ‘mountain’ allegedly to obtain power with which he does wonders and miracles.

Armed with a spiritual power (whose source remains as intriguing as it is doubtful) he heals, delivers and performs eccentric ‘wonders’. And by doing these extra-ordinary things he has suddenly become a benevolent billionaire!

Rumours had it that the prophet must have gone somewhere in tenebrous quarters signing a ‘lucrative’ pact with Lucifer thereby drawing crowds and making a hell of name and money for himself.

In Igboland christianity is a big business. And the more the performance of wonders and miracles the more popular and richer you become. If you set up a healing or deliverance home, for example, then chances are that you would become famous — even playing god to the gullible!

Fake pastors and prophets and churches abound in the east in an evangelical industry with little or no rules of engagement. You can rent an uncompleted building somewhere in town or mount a canopy on a virgin land and before anyone could scream ‘holy Jesus’ you are smiling to the bank wearing fancy suits and riding in SUV. That is Nigeria for you.

Recently a short video became viral online depicting prophet Odumeje performing his drama inside the Government House (in the office of the Chief of Staff to the Governor) in the capital city of Umuahia, Abia State. The video showed the excited Chief of Staff to the Governor, Dr Anthony Agbazuere, spraying two bundles of Naira notes on the prophet as the latter uttered the good tidings to the few audience in attendance.

At the end of the video clip CoS Agbazuere was moved to the extent that he danced grinning as the ‘wonder boy’ gesticulated for more Naira rain!

Following the controversy generated by the shameful trending video the Abia State Governor, Okezie Ikpeazu, perhaps infuriated, released a statement suspending Agbazuere. Many Nigerians online had condemned the show of shame wondering how a state owing workers backlog of salaries and faced with daunting developmental challenges could permit a high-ranking staff to act so brazenly foolishly.

But Abia state is still a part of Nigeria where politicians are crazy. Nigeria boasts of megalomaniacs as Governors but Ikpeazu is one dour lost state chief executive whose legacy post-governorship is already written off as a waste.

Agbazuere, given his closesness to the Governor, must have noticed his principal’s incompetence as the late Abba Kyari, ex-CoS to President Buhari, did hence the need to seek spiritual power in order to replace him or render him controllable.

Governor Okezie Ikpeazu remains one of the least performing governors in south-eastern Nigeria. He neither inspires anyone nor delivers any democracy dividend to Abians. He demonstates daily his lack of capacity to govern effectively. That is why it was surprising the swiftness with which he acted on the Odumeje/Agbazuere abominable episode.

An ugly man from every indication Agbazuere exhibited obscene wealth worthy to be interrogated. So he kept bundles of money in the Government House? Wherever the two bundles came from, who knows, more bundles could be found hidden somewhere to meet the exigencies of ‘settlement syndrome’. General Ibrahim Babangida has many disciples!

Prophet Odumeje has effortlessly transformed his hitherto miserable life into a success story, saying and doing the ‘right’ things at the right time. He has lately become hugely popular, a golden boy who delivers divine messages! He knows that in Nigeria (especially the south-east) religion remains the opium of the masses. To become a rich famous man just visit a shrine at wee hours of the night or strike a nocturnal deal with Satan and there you are, fortified, ‘worshipped’ and besieged by the needy.

The so-called Prophet dwells, like many before him, in an environment corrupted by hypocrisy and immorality. Almost everyone sins every now and then and rather than repent they rush to churches every other Sunday to ‘worship’ God hoping that their sins would be forgiven by so doing. But God is not fooled by such mundane antics.

Odumeje has been empowered by his benumbed followers, in high and low places, to indulge even more egregiously in his campaign of playing the ‘Jesus’ of Nigeria. We have many ‘saviors’ yet poverty elects our space as its capital in the world! We have countless ‘saviors’ yet many of our compatriots are unemployed or worst still, employed as terrorists or kidnappers or armed robbers. We have innumerable ‘saviors’ yet insecurity stalks our land. ‘Saviors’ abound yet leadership constitutes a serious problem.

The crucial questions the Abia state government must provide answers to are: Why and how did Odumeje find his way to the Government House in Umuahia? What was his mission? And what did he do to deserve the thousands or millions of Naira he was showered with?

Perhaps, Agbazuere must have invited the flamboyant prophet over to pray for him and make his position invincible. Or Odumeje must have booked the appointment with Agbazuere in order to swindle him by revealing a phony prophecy or dream! Whatever is the case the suspended CoS acted irresponsibly and deserved to be sacked outright.

Prophet Odumeje, much like Father Ejike Mbaka of Adoration fame in Enugu, knows what he wants by getting close and befriending politicians of fortune, the rich and powerful. Money is always on their minds and not spiritual salvation of the faithful. May God deliver Nigeria and Nigerians from ecclesiastical charlatans and clowns.