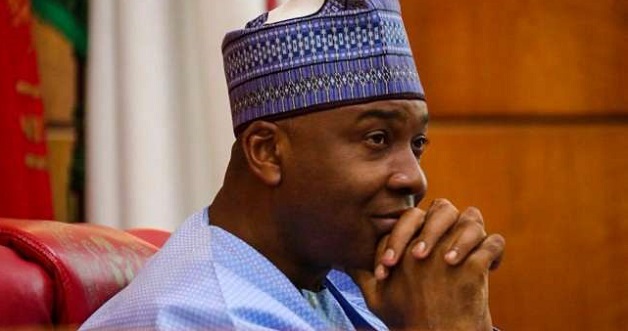 Investigation of Senate President Bukola Saraki over Offa robbery allegation is not yet over, it was learnt on Thursday.

This was stated by the Minister of Justice and Attorney-General of the Federation (AGF), the Nigeria Police Force (NPF) and the Inspector-General of Police (IGP).

They argued that Saraki was never cleared in the opinion the Director of Public Prosecution (DPP) rendered on the interim report of investigation submitted for the DPP’s advice by the police, as being claimed in some quarters.

According them, the truth of the matter was that the DPP, after analysing the interim report of investigation by the police, suggested further investigation in the claims made by some of those being held over the crime, particularly as it relates to the source of the weapons used and where the operation was plotted.

They further explained that following the advice by the DPP, that already further investigation has been conducted and that a more thorough investigation report has since been submitted to the DPP for further opinion.

Insisting that “investigation is still ongoing on the case”, the AGF, IGP, and NPF said that it was premature for anyone to claim that Saraki had been exonerated in the matter.

They also refuted the insinuations that the investigation of the Senate President in the robbery issue was political and intended to blackmail him and dent his reputation.

The AGF, the NPF and the IGP made this known in their separate counter affidavits filed in response to a fundamental rights enforcement suit by some 10 individuals.

The 10 applicants, who are Anthony Onukaogu, Lawrence Umudu, Bamidele Ojo, Ikenga Imo Ugochinyere, Ogechi Duruaku, Veronica Onoja, Chidiebere Achebe, Chika Onyiorah, Chigozie Eburuo and Patrick Uzim, supposedly acting for the Senate President in a suit pending before Justice M. A. Nasir of the High Court of the Federal Capital Territory (FCT), Jabi, Abuja, claimed that the decision by the police to question Saraki in relation to the robbery was instigated by his political enemies; intended to blackmail him and dent the Senate President’s reputation.

READ ALSO: Believe me and not the UN, no ransom was paid for Dapchi girls— Lai

However, the AGF, NPF and the IGP, not only filing separate counter-affidavits, in their response, also filed motions and notices of objection challenging the applicants’ locus standi, the court’s jurisdiction and the propriety of court’s interim order of injunction, made on August 8 by Justice Nasir, restraining the respondents from further inviting Saraki in relation to investigation on the robbery case.

Saraki is among Nigerian politicians seeking to wrest power from President Muhammadu Buhari in 2019.

He had only recently returned to his former party having had a rough time in his former ruling All Progressives Congress (APC) party. While in APC the Senate President faced different court battles initiated against him by the Federal Government.