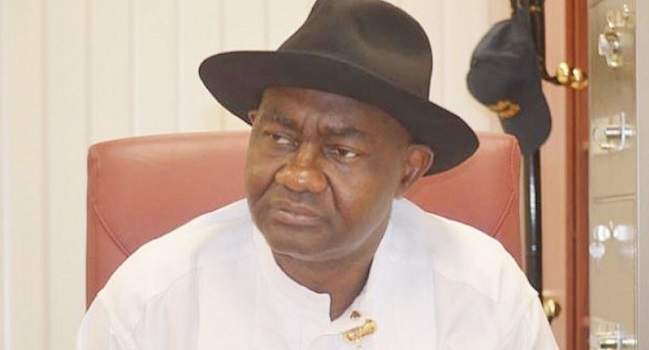 We have studied the position put out in the public domain by Senator Magnus Ngei Abe who represented the Rivers South-East Senatorial District in the National Assembly on the platform of our great Party.

In it, Senator Abe who apparently picks up the garb of a lawyer and the tone of a jurist declares that Hon. Igo Aguma is the Chairman of the Rivers Caretaker Committee of the All Progressives Congress, APC.

Like all true Democrats, we respect the right of the Distinguished Senator to his freedom of expression. Similarly, we recognize his right to associate with anyone of his choice, including Hon. Igo Aguma in whose defence he has spoken.

The Senator declared and we quote, “This action at the time it was done was a clear breach of a valid court judgement, even if the judgement is set aside the action as at the day it took place was in defiance of a subsisting judgement and cannot be repaired.”

We have taken note, and we would like the public to take copious notice, of the phrase “cannot be repaired”, which we have reason to believe was deliberately used in context by the former Senator.

The Distinguished Senator further remarked, “As far as the law is concerned, the state executive committee of the APC can only meet if summoned by the chairman or a proper procedure is used by members to override the chairman.

Senator Abe may not know it, but he may have unwittingly attempted to deliver judgement on a matter of great public interest that is pending before a court of law.

We hold that Senator Magnus Abe’s comments are predictably pregnant. Without mincing words, we want to state categorically that such pronouncements of a judicious nature uttered by a politician in the mould of a Senator Abe lead to all kinds of interpretations.

In our pluralistic society, allegations of bribery and corruption, growing ties between judges and politicians as well as attempts through sharp practices to bend the rules of court are increasingly being levied against jurists.

We believe that Senator Abe should have exhibited considerable caution in exercising his right to free expression, especially on anything relating to the matter pertaining to Hon. Igo Aguma.

Although none can say with a measure of certainty where the pendulum would swing, Senator Abe and his associates who have been boasting among their friends that they have judges in their pocket may have succeeded in casting very serious aspersions on the integrity of decision which is yet to come.

Is it possible Abe was playing the role of a judicial prophet and projecting himself as a man with the ability to see tomorrow? Was he inadvertently writing a script? Was he hinting at something that he knows? Something that is not known to the rest of us? Was Abe setting an agenda? If so, who was Abe setting it for?

Senator Abe owes members of the public, particularly those who are his fellow compatriots in the APC, answers to these very disturbing questions.

On our part, we are worried by the timing of the Senator’s remarks. As the Senator is obviously aware, a matter concerning disagreeing parties within the APC is billed to come up before a Port Harcourt High Court on Tuesday.

Hon. Igo Aguma whom Abe has come out stoutly in support of has instituted contempt proceedings against members of his party despite an order by the Leader, President Muhammadu Buhari asking all in the APC to put an end to court actions. Yet, Abe would want us to believe that he and his associates are respecting the official position of the President.

No matter how brilliant his contribution on the subject matter may be, Abe as a senior lawyer should know without being told that he was openly commenting on a matter which falls within the domain of a Court.

As a practicing jurist, given the tone of his pronouncements on the matter, Abe ought to know that legal conventions do not support the posture that he took at such a critical time.

We consider the comments of Senator Magnus Abe as an aberration and appeal to him as one of the leaders of the APC to tone down on the level of impunity which has led to his unwarranted remark at this time.

As responsible members of the Caretaker Committee which is constituted by statutory members of SEC, we have called for a cessation in hostilities. Our position is equally in line with the decision of the leadership of the APC at the centre.

Our expectation is that Senator Abe would have used his influence with Hon Igo Aguma to prevent him from proceeding to court in defiance of the President and a party that he claims to be part of.

We would not have bothered to respond to the Senator’s comments on processes allowed in the party constitution either for the purpose of holding meetings or removing or suspending erring officers of the party.

Abe’s admission that he attended the meeting called by Hon Igo Aguma Aguma shouldn’t support the claim that he made which suggests a quorum was formed. We challenge Senator Abe to name those who attended the said meeting. Where necessary, he should also put forward a list of signatories.

Besides, how can Abe explain the fact that 28 out 38 statutory members whose names were published suspended Igo Aguma? Abe should be able to provide an answer to this mathematical equation when next he attempts to discuss this matter.

We are glad that Senator Abe agrees that there are other provisions in the party constitution which allow “procedure” that “is used by members to override the chairman.” The fact that 28 out of 38 persons agreed to meet shows that such efforts were made to obtain signatories and to persuade Aguma to call a broad based meeting after he acted as a sole administrator.

Those who signed onto the suspension of Igo Aguma did not fall from the skies. They participated in the meeting which Abe wants the world to know took place at Chief Andrew Uchendu’s residence.

We wonder why Abe is raising issues over the location where a duly constituted meeting held. Did it bother the Distinguished Senator when Hon. Igo Aguma operated from his bedroom instead of an established office set up for the purpose of directing party affairs?

Today, the Caretaker Committee headed by Hon. Sokonte Davies as Ag. Chairman of the APC has done what Senator Abe could not encourage Hon. Igo Aguma to do. The Caretaker Committee is operating from the APC State Secretariat as expected by teeming members of our great party. Party activities are similarly peaking.

Truth is Hon Igo Aguma received advice from his colleagues who were prepared to rally round him. We now know from the comments made by the Senator that he may have been acting with those who denied the suspended Chairman of wise counsel.

We are Progressives and we are expected to embrace progressive ideas. Besides, we are Rivers people and we want Rivers people who belong to the APC to address differences amongst them as brothers would do.

Finally, Senator Abe should look around him. He would see that those who may be engineering him from the outside to continue a needless war in his backyard have kept their own ends safe. It is time, Distinguished Senator, for you to come back home and help with the effort to keep our home front safe, and our membership united.