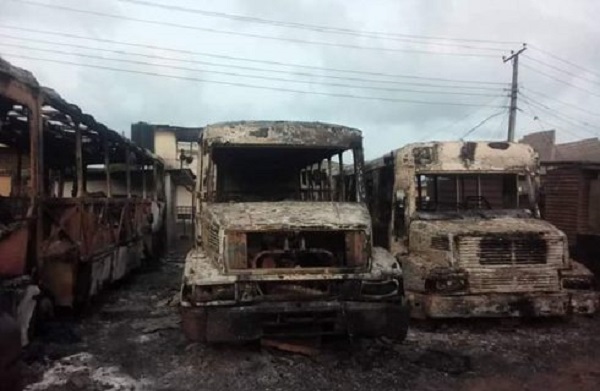 A Police Inspector has been declared missing by the Ogun State Police Command, while 25 persons arrested following a breakout of violence on Monday in Ifo local government area of the state.

The break out of violence was in protest of the alleged killing of a 25-year-old motorcycle electrician, identified as Akeem Akinsanya, by officers of the Nigeria Police Force (NPF).

According to reports, Akinsanya was killed after he was hit by a bullet shot by an officer of the Zonal Intervention Squad of Zone 2 Police Command at Iyana Coker area of Ifo, a market community on the Lagos-Abeokuta Expressway on Sunday, April 21, 2019.

The officers opened fired at the bus stop in Ogun State, around 4:30 pm, to disperse a crowd who tried to prevent them from taking away another man who was arrested for possession of firearms.

Aggrieved youths were said to have regrouped to protest against the murder. They burnt some vehicles at the Constituency office of the Ogun State House of Assembly’s Deputy Speaker, Olakunle Oluomo in Ifo.

The Commissioner of Police, Bashir Manama, on Monday led his men to the scene for an on-the-spot assessment.

Command’s spokesman, DSP Abimbola Oyeyemi, told newsmen in Abeokuta on Monday that both campaign office and five buses parked at Coker Bus-stop, belonging to Oluomo were burnt by the arsonists.

He affirmed that the young man was killed by a stray-bullet while the policemen were making efforts “to scare the mob which was ready to attack them.”

According to Oyeyemi, men of the zonal Intervention Squad had already arrested a suspect for being in possession of guns.

DSP Oyeyemi said: “Now, a police inspector is missing. The police inspector was macheted during the mob attack and up till now his whereabouts is unknown. That gave the credence that they were attacked.

“Some people mobilised themselves and attacked the office of the Deputy Speaker, burnt down the office and five vehicles in that area.

“The correlation between the incident that happened and the reaction of the people is what we cannot establish because there is no nexus between the two.

“For now, we have arrested 25 suspects. The issues are two: the case of murder and arson.

“But, the case of arson is what the people have committed. That act is pure criminal, there is nothing that warrants the spontaneous action,” Oyeyemi said.