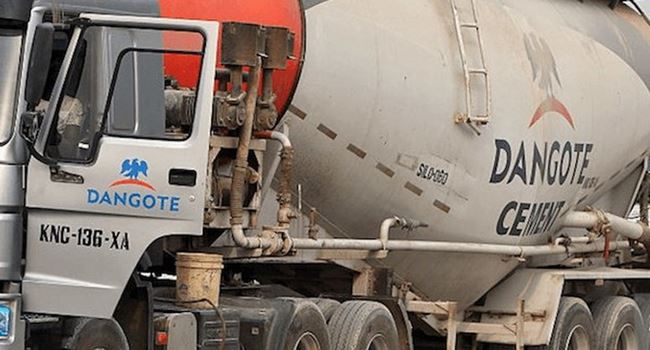 No fewer than two victims were killed and seven others reportedly injured in an accident involving a truck belonging to Dangote Cement Plc, on Friday along Toll-Gate, Sango-Ota, Ado-Odo/Ota Local Government Area of Ogun State.

The incident which was confirmed on Saturday by the Public Relations Officer of the Traffic Compliance and Enforcement Corps, Mr Babatunde Akinbiyi and the state Sector Commander of the Federal Road Safety Corps, Clement Oladele, involved the Dangote truck, three vehicles and two motorcycles.

According to Oladele, the Dangote truck was fully loaded with cement bags when the accident occurred.

“However, it took the combined efforts of the police, TRACE, FRSC, NSCDC (Nigeria Security and Civil Defence Corps) and SO SAFE Corps to prevent a mob from setting the truck ablaze.

“Moreover, the Dangote truck driver had escaped while efforts are ongoing to load the cement onto another truck to ease the lifting of the truck from the vehicle it fell upon,” Oladele said.

Related Topics:accidentDangote Cement
Up Next