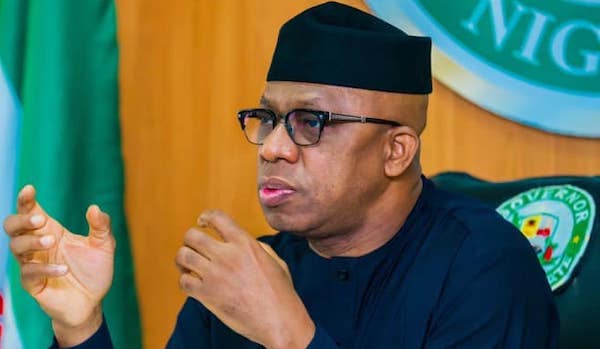 Ogun State government Sunday vowed to deal ruthlessly with criminals terrorizing the people of the state.

Governor Dapo Abiodun, who made the promise in a statement issued in Abeokuta by his Chief Press Secretary, Mr. Kunle Somorin, urged the police to intensify efforts at curbing the nefarious activities of criminals and asked them to smoke them out of their hideouts.

He said the state government would avail all other security outfits, including the Department of State Security Service and the armed forces, with the necessary material and logistic support to end the reign of terror unleashed by armed robbers on the state.

The state police command had earlier on Sunday paraded 150 suspects in connection with recent series of harassments, robberies, burglaries and cult clashes that in Agbado Ijaiye, Sango, Ijoko and Ifo axis of the state.

The governor said: “It has become expedient that we do not spare the rod and spoil the child. Anybody, no matter whose child he or she is, if found guilty of armed robbery, would be visited with the full weight of the law, including capital punishment.

“I will not hesitate to confirm sentences, even of capital punishment, if that will deter these social misfits. Ogun has zero-tolerance for criminals and we will deal with it with venomous measures.”

He commended the state police command for its swiftness and prompt adherence to the directive of the state government to flush out those turning the sit-at-home order to a criminal enterprise.

Abiodun enjoined all other relevant agencies to immediately up their intelligence gathering mechanisms to ensure that there was no reoccurrence of the criminal acts, especially as the state continues to battle the COVID-19 pandemic.

He restated the government’s commitment to ensuring that the state remained conducive for living and businesses without fear of criminals and other unscrupulous elements.

The governor also assured the people that he would not joke with the security of lives and property of citizens and residents alike.

COVID-19: ‘We’re not out of the woods yet,’ Adeboye backs Nigerian govt on extension of lockdown orders