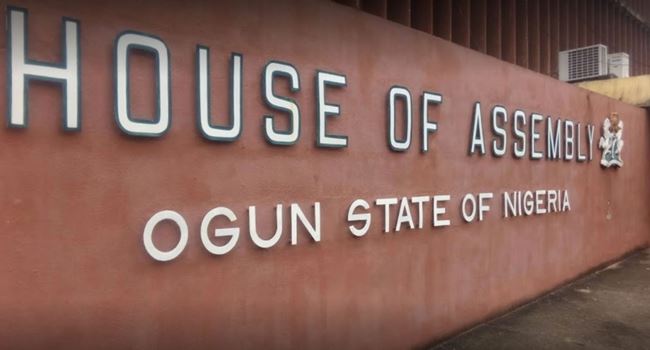 Local government councillors across Ogun State on Thursday besieged the state House of Assembly in Oke-Mosan, Abeokuta to protest against their suspension by the lawmakers.

The state Assembly had last week suspended the 236 local councillors in the state over offences bothering on financial misappropriations.

In what looked like a drama during the protest, the councillors during their protest prevented the state lawmakers from gaining entrance into the premises of the state assembly.

The placards with them conveyed several messages such as; ‘The lawmakers are the lawbreakers’ ‘Respect Supreme Court on local government tenure,’ and ‘OGHA led by Rt. Hon. Suraj Adekunbi, don’t rubbish Dapo Abiodun’s administration through your selfishness,’ among others.

While the protest was ongoing, the convoy of the Speaker, Suraj Adekunbi, arrived the premises.

The protesting councillors immediately charged at his convoy and hurled abuses at him.

But the speaker alighted from his vehicle and addressed them on the need to convey their grievances in a better manner than raining abuse.

Meanwhile, a councillor from Abeokuta South East Local Council Development Area,  Azeez Oloyede, who spoke for the protesters responded to the speaker that they were surprised that the Assembly could take such a decision.

His words: “We heard the rumour that we were suspended; why is it that it is when the issue of local government autonomy is being addressed that you are suspending us from office?

“We don’t even believe that because up till now, we have not received any letter to that effect and when we got to our various offices, we were being harassed by local government workers and career officers.

“As far as we are concerned, there is nothing like suspension. What is our offence that warrants this kind of rumour that we, the legislators and chairmen, are suspended?”

Adekunbi later told journalists that the Assembly acted within its power.

He claimed that the Assembly had received a lot of petitions against the administration of local governments in the state and that he had brought same unofficially to the notice of the chairmen.