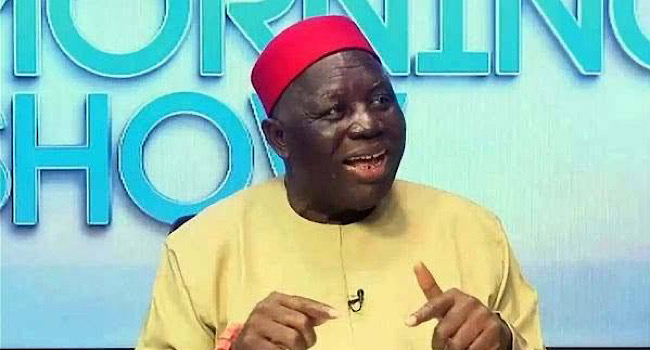 The apex Igbo socio-cultural organisation, Ohanaeze Ndigbo, has berated the leader of the proscribed Indigenous People of Biafra (IPOB), Nnamdi Kanu, over his recent comments that the people of the South-East should wage a secession war with Nigeria.

The President General of Ohanaeze Ndigbo, Professor George Obiozor, who was speaking at a grand reception in his honour by Ndigbo in Lagos on Saturday, said the Igbos were not at war with Nigeria, and accused “Kanu and his conspirators over views that have made people point accusing fingers at Igbos as secessionists.”

Obiozor, a former Nigerian ambassador to the United States, added that Ndigbo would continue to seek justice, peace and fairness in all their dealings with everybody in Nigeria.

“The greatest affliction of man is insecurity. With insecurity, nothing happens that is positive,” Obiozor said.

“Among the Igbo, one of the challenges we are faced with is security threat both within the Igbo zone and within the country as a whole.

READ ALSO: Ohanaeze Ndigbo laments use of force in Orlu by military

“The Igbo nation is not at war with Nigeria and we are not intending to go into war or demand a separate existence from Nigeria. So Igbos are not secessionists.

“Concerning the problems and the fingers pointed at Igbo because of Nnamdi Kanu, Nnamdi is our son and he must listen to us! The future of Biafra is well beyond the capacity of young men.

“Everybody should stop utterances or actions that will or have the tendencies to put Ndigbo in present and immediate danger. That is what my message is in this matter.

“Biafra requires mature and experience handling and not a child’s play. Children should stop playing with fire and children shouldn’t play with fire.

“Nnamdi Kanu is one of us. He is our son and he must listen to some of us because he’s one of us.”