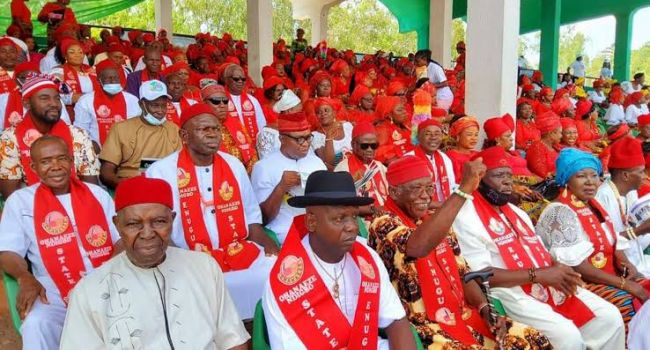 A faction of Igbo socio-cultural organisation, Ohanaeze Ndigbo Worldwide, has slammed the presidential flag bearer of the Peoples Democratic Party (PDP), Alhaji Atiku Abubakar over comments he allegedly made during a meeting of the party’s stakeholders in Enugu State.

Atiku was quoted as saying his presidency would be a stepping stone to an Igbo man becoming president after his tenure.

Reacting to the alleged comments, the Igbo group described the claim as not only laughable but diversionary as the Igbos have credible and qualified people who can become Nigeria’s president if given a level playing ground.

In a statement on Friday issued by the Secretary-General of Ohanaeze, Okechukwu Isiguzoro, the group questioned how Atiku came up with the claim that he would be a “stepping stone to a futuristic Igbo Presidency” even when “Nigerians, united across ethno-religious lines, overwhelmingly support Peter Obi, the Labour Party (LP) presidential candidate, for the 2023 general elections.”

“Ohanaeze wishes to state that the statement of Atiku, the presidential candidate of PDP in Enugu a few days ago, that his presidency would be ‘a stepping-stone’ to Igbo Presidency is laughable and diversionary,” the group said.

“How can Atiku claim such when Nigerians, united across ethno-religious lines, overwhelmingly support Obi for president of Nigeria, in 2023, not based on ethnicity, but because what he represents is hope for a new Nigeria.

“In terms of competence, credibility and capacity, Obi is in a world of his own. Neither Atiku nor Bola Tinubu of the ruling All Progressives Congress APC, comes close to him.

“Sincerely, Nigerians are really yearning for a Third Force Presidency due to their terrible experience under APC and PDP governments since 1999,” the statement said.

Related Topics:AtikuOhaneze Ndigbo
Up Next