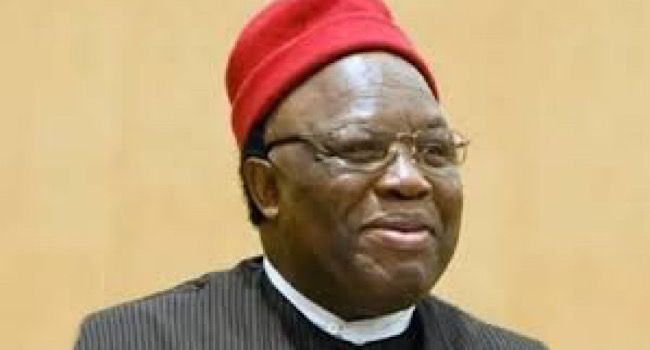 The apex Igbo socio-cultural group, Ohanaeze Ndigbo, has lamented the use of what it says is excessive force by the Nigerian military in trying to dislodge operatives of the Eastern Security Network (ESN), from forests in Orlu local government area of Imo State.

The President General of Ohaneze Ndigbo, Prof. George Obiozor, who spoke while visiting the traditional ruler of Amaifeke in Orlu, His Royal Majesty, Eze Dr E. C Okeke, on Monday, frowned at the use of force, intimidation, and violence in the area, adding that if it is allowed to get out of hand, it could lead to a national catastrophe.

Obiozor said those who “preached or preferred military solutions to Nigeria’s problem were equally a threat to Nigeria’s unity as those enemies they were fighting.”

“Nigeria is in a precarious situation and a great caution must be taken by the leadership to avoid events that have the capacity of incrementally aggravating or opening more threats of national crisis,” Obiazor said.

“The use of the violent method will lead to a synchronised national crisis and ultimate disintegration of Nigeria; this too must be avoided.

“Insecurity in the country is real and should be treated as a matter of national emergency. That is the only way we can get out of this quagmire so that it will not consume us as a nation.”

While reacting to the message by Obiozor, Eze Okeke, who is also the Chairman of the state Council of Traditional Rulers, thanked God that peace had eventually returned to Orlu.

“It is surprising to people that this crisis is happening in Orsu in Orlu zone. It should have taken place in the bush instead of the town. We don’t want war but peace,” he said.

Related Topics:#featuredCrisisESNMilitaryOhaneze Ndigbo
Up Next