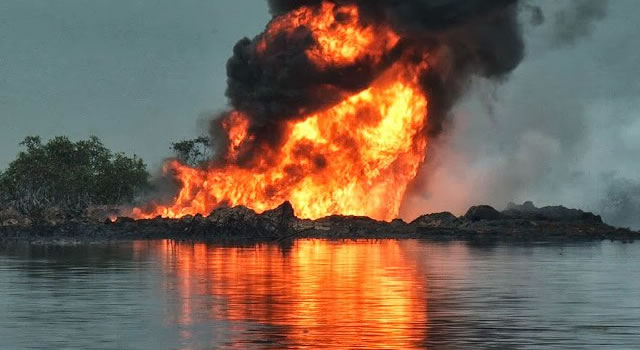 The Nigerian National Petroleum Corporation has dismissed claims by a senator that the pipeline explosion in Abia state that killed dozens of people was caused by negligence on the part of the corporation.
A statement released by its spokesman, Ndu Ughamadu on Thursday maintained the position of the corporation.

It will be recalled that a fire incident occurred on system 2E pipeline network in Umuimo and Umuaduru communities of Abia state leaving dozens of people dead and property destroyed.

The NNPC had earlier blamed the fire outbreak on activities of oil thieves.

The spokesman pointed out that the items such as jerry cans at the scene of the incident indicated that the fire was ignited by activities of vandals in the area.

Mr Ughamadu further argued that the explosion was caused by activities of oil thieves in an attempt to intercept the flow of petrol from Port Harcourt to Aba.

Senator Theodore Orji representing Abia Central had on Wednesday hinged the explosion on negligence on the part of the NNPC and the police.

but Mr Ughamadu linked the underdevelopment of the Enugu depot to the incessant vandalism of pipeline facilities along system 2Ex pipeline of Way (PROW).

While regretting this, he advocated collaboration between the corporation and all government agencies as well as host communities to tame the recurring plague.

He further warned the public against tampering with oil facilities.