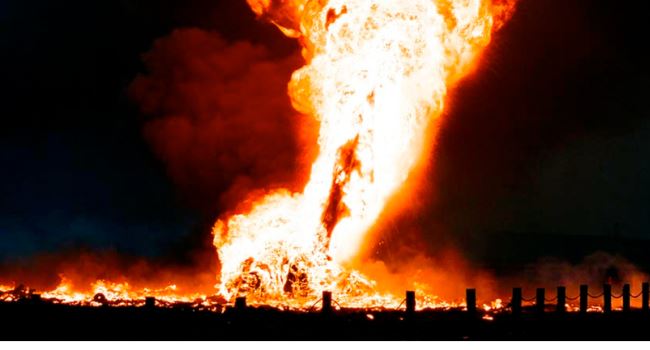 Ten communities affected by an oil well fire in Ondo State has demanded for $2.5 billion as compensation from Chevron Nigeria Limited.

The fire incident, which engulfed the oil well at the Ojumole area in Ilaje Local Government Area of the state, was said to have affected about 10 communities.

The communities made the demand at a stakeholders’ meeting called by the Ondo State House of Assembly between the communities and CNL.

The representative of the communities, Dr Akin Akinruntan, in a paper he presented, diisclosed that the fire was yet to be put out, adding that the compensation was imperative in order to cushion the effects of the inferno on the lives of the residents of the affected area.

He said: “The implications of the incident on the people of the affected area is enormous; it has destroyed the land and nothing can grow on it.

“The people of the affected communities don’t have portable water to drink; the water there is not drinkable. Fishing is the major occupation of the people there and since the incident happened, people can no longer go for fishing because the water has been polluted.

“The inferno has also affected the climate which could later cause health challenges for the people of the area. So, we demand a sum of $2.5bn from Chevron as compensation. We also demand that Chevron should do a clean-up in the affected areas.”

Responding on behalf of Chevron, the General Manager, Policy, Government and Public Affairs, CNL, Mr Esimaje Brikinn, said the company had taken necessary steps to put the fire under control.

He said: “Chevron is currently working with emergency response contractors to safely put out the fire as quickly as possible.”

“Our activities will be consistent with the relevant environmental laws, regulations and guidelines. We will continue to conduct our operation safely, reliably and efficiently, with utmost consideration for the people and the environment,” he added.

Nigeria must be prepared for next global economic crisis, Emefiele says