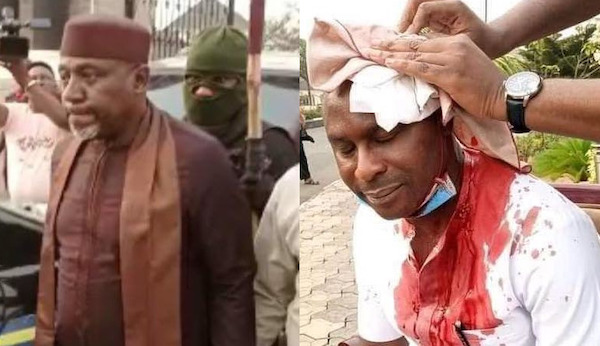 The Senator representing Imo West Senatorial District, Rochas Okorocha, on Sunday accused the aide of the State governor, Hope Uzodinma, of attacking him with 1,000 thugs.

Police on Sunday arrested the former Imo State governor and two of his aides in connection with a crisis that trailed the state government’s move to seal a residential estate linked to his wife, Nkechi.

The other two persons were – Okorocha’s Deputy Chief of Staff in charge of domestic affairs, Ijeoma Igboanusi and his ex-Commissioner for Transportation, Lasbrey Okafor-Anyanwu.

In a statement issued on Sunday night by his media aide, Sam Onwuemeodo, the ex-governor claimed that Uzodinma’s Special Adviser on Special Duties, Chinasa Nwanari, allegedly led thugs who stormed the Royal Spring Palm Estate in Owerri and destroyed vehicles in his convoy.

“They attacked and damaged all the vehicles in his convoy. They also attacked his personal aides.

“Senator Okorocha was with only his personal aides when the thugs unleashed the attack.

“This is the information we can give as of now. We are still watching events as they unfold.

“Okorocha has the strongest political structure in the state and teaming followers in the state. If he had expected the attack, he would not have moved with his personal aides alone.

“Okorocha has never been a violent man. This planned attack but unprovoked and unwarranted has opened a new, but ugly chapter in the politics of the state. We shall react fully to the situation.”