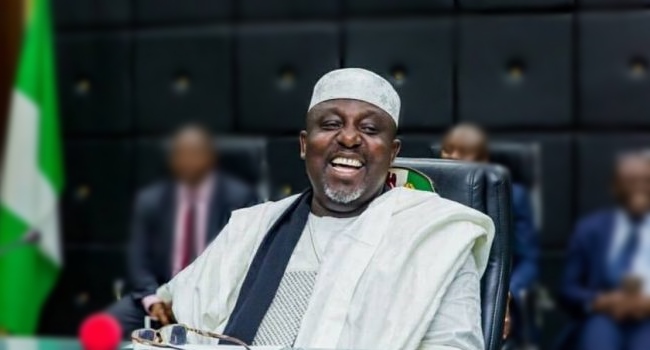 The outgoing governor of Imo State Rochas Okorocha has replied comments made by the Director General of the Voice of Nigeria (VON) Mr Osita Okechukwu, over a recent media attack on him.

Okorocha who replied the VON DG in a statement by his Chief Press Secretary, Sam Onwuemeodo, on Sunday, said he (Okechukwu) should rather learn the ropes of politics from his ward after losing in his booth in the 2019 general election.

The Imo State governor also reminded the VON DG that he still holds the ace of the All Progressives Congress (APC) politically in the South East zone of the country.

Okorocha said; “He has continued his media attacks on Governor Okorocha even when one had thought that with the 2019 election, he should have stopped his insults on the Imo governor, having seen that the election had proved that without Okorocha, there is nothing like APC in the South East and Imo in particular.”

“But, prior to the 2019 election, those playing the politics of 2023 in 2019 recruited men like Okechukwu against Governor Okorocha, blackmailing him at the least opportunity they had, and gave the erroneous impression that without Okorocha, they could fly in Imo and South East generally with APC.

“But, in the 2019 election, the fact spoke for its self, that Okorocha truly holds the ace of APC, both in Imo and in the South East generally. And a careful look at the 2019 election results showed that Okorocha was in charge, except that with the crisis, men like Okechukwu created in Imo APC, INEC capitalised on that and did some strange things.

“Incidentally, and interestingly too, Osita Okechukwu is playing his own politics on the pages of the newspapers and most of the time, attacking Governor Okorocha unprovoked. He lost all the elections in his booth, ward and local government. On the day of the presidential election, he was warned by the People’s Democratic Party (PDP) guys not to come out and he never came out.

“We challenge him to publish the results of his booth, ward and local government in all the elections. He does not talk about APC in his state, but always talking about Imo APC because he knows that is the only state in the South East APC is grounded before they used wicked blackmail and unfounded propaganda to inject virus into the party.

“And all those who won elections in Imo on the ticket of APC are all members of the Rescue Mission Government, which Owelle superintends. The Action Alliance(AA) candidates who won their elections were also those displaced in APC, including the governorship candidate of AA, Uche Nwosu, who won the governorship election with correct votes and not with inflated figures.

“Okechukwu should try to build APC in his ward before continuing his insults on Okorocha,” the statement added.

Mr Okechukwu had alleged that Okorocha and the national chairman of the party, Adams Oshiomhole had ruined the fortunes of the APC in the zone.

The VON DG who revealed that much in an interview with the Sun also held that it is not just general belief, but national consensus governing the 4th Republic of Nigeria that the pre-eminent post of president rotates between the Northern belt to the Southern belt.

Related Topics:OkorochaOkorocha replies VON DGsays he still holds the ace in S'East politics
Up Next