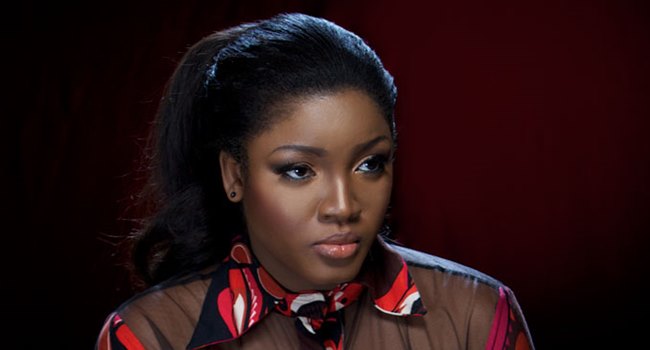 Mrs Omotola Jalade-Ekeinde is a combination of brain and beauty. In the vibrant Nigerian entertainment industry she has, over time, demonstrated her natural talent making money and name for herself and garnering local and international awards for distinguishing herself in her chosen endeavour. In Nollywood film industry in particular and elsewhere in general this brilliant beautiful lady has proven her mettle. Nigeria is, of course, blessed with both human and natural resources to the extent that Providence must have been disappointed at our collective failure to turn these abundant resources into making our people live better lives.

Earlier last week an innocuous tweet by the popular elegant Nollywood superstar had sparked controversy online generating some favourable and unfavourable responses by concerned Nigerians. Lady Omotola, not known for her radicalism or activism, had sent out a tweet online lampooning the Buhari/Osinbajo regime and denouncing the frequent killings of innocent Nigerians by the over-zealous security agents and decrying the economic hardship and lack of cash in circulation. She described living in Nigeria as amounting to a ‘hellish’ experience!

The controversial tweet went thus: “The country under your watch is Hellish! @YOsibanjo @MBuhari @NGRPresident.. The lack of Money in circulation, Now coupled with the Continuous Assault n Killings by Uniformed men will make this Country implode!!! It is Unbearable! Do something! Insecurity! Fear n Desperation everywhere”. Of course uniformed men are constantly assaulting innocent Nigerians killing some and throwing others in detention, the situation remains unbearable, insecurity, desperation and fear are ubiquitous.

Soon after the tweet went viral online the Personal Assistant to the President on New Media, Bashir Ahmed, had reacted in a derogatory tone. He had sent out his own tweet that countered what Omotola said taking the expected position in defense of his principal(s). Ahmed had said via his official twitter handle: “Madam Omotola those who are working for CLEAN money are not complaining and will never refer our dear country as ‘hellish’… In Kano State alone, from 2015 to 2018, no fewer than 200 medium and small scale rice milling centres emerged. For that, billions circulated among millions”.

Omotola, seemingly disgusted by the PA to the President’s insinuation of ‘clean money’ or dirty money or whatever had fired back thus: “As long as you’re not insinuating that I am not working CLEAN for my money… I hear you. Its good that there are some progress… Do you truly want to say you dont see all that’s really wrong? Can we fight for our future in truth for once? Without being partisan?”.

To the best of our knowledge Omotola could be classified as one of those Nigerians whose source of livelihood could be vouched for. She is among many making ‘clean’ money out of a legitimate verifiable source. If Ahmed meant associating Omotola with crooks and scoundrels making money by hook or by crook then he must have hit a trailer-load of sand! He failed to sound reasonable but his position could be understood in the sense that crimes and criminality are not alien to Nigeria and Nigerians.

In a corrupt and compromised system run by his masters in Abuja it would seem that Ahmed was telling us that we could still find paragons and/or angels in the FCT or elsewhere around Nigeria. They claim they are fighting corruption but the international agencies monitoring the global graft index are saying otherwise by their annual reports. They say we are safe under their command but thousands have lost their lives just for their Nigerianness! They tell us that the economy is sound and doing well but we are rated as the poverty capital of the world!

Lady ‘Omosexy’ was damn right by labelling our country as “hellish”. Come to think of it, nothing could be more hellish in a country where citizens are daily killed extra-judicially by the unprofessional police force, armed uniformed bandits et al, where hunger and starvation stalk the land and where corruption and mediocrity of politicians have conspired to rob us of our destined national greatness and glory. If saying so online constitutes a crime then all of us are guilty indeed.

With mounting security challenges, economic stagnation and social discontent we have made it clear that Buharism in the ‘first level’ was nothing much to write home about. And the so-called ‘next level’ may well turn out to be worse! What is happening in Nigeria right now is worse than what happened (or is still happening) in Algeria and Sudan leading to revolutionary regime changes. But unlike the Algerians and the Sudanese we are not only docile but revolution-shy. We are suffering yet smiling happily! We are known globally as a ‘happy’ people afraid to confront the evil ravaging our land. We love living it big celebrating what others in saner climes hold in absolute scorn: corruption. We celebrate foolishly our collective failure as a nation bogged down by arrested development.

Madam Omotola spoke the minds of the silent millions toiling daily to eke out a living in an atmosphere of injustice, intolerance, infrastructural deficit, terrorism and organized looting of the commonwealth. By saying that Nigeria is a living hell Omotola struck a resonating chord that was in sync with the reality on the ground. As a people united by poverty we pretend a whole lot feigning ignorance of what majority of our compatriots go through on a daily basis in order to survive. Yet the rich is getting richer and the poor poorer!

During the giddy Jonathanian presidential era some years ago some presidential aides (including the beefy Doyin Okupe) were branded “attack dogs”. Today, Buharism is brimming with attack dogs and pussy-cats: Shehu Garba(ge), Lauretta ‘mermaid’ Onochie and now the Bashir ‘online viper’ Ahmed. Indeed, they are good at what they do: calling a spade by another name, defending the indefensible and insulting our collective sensibilities. Pleasing the master in Aso Rock and the cabal aiding and abetting his presidential mediocrity could be a hard job featuring hypocrisy, sycophancy and playing the phoney Joseph Goebbels.

Nigeria is not only a ‘hellish’ place to live in, one fraught with miseries and mysteries, but more aptly a basket case of hopelessness. Let those like Bashir Ahmed living in fools’ paradise provide evidence to the contrary!

Happy Easter to all Nigerians at home and abroad who, like us, believe, with patriotic conviction, that Nigeria is a hellish jungle. May the remission of sin for which Jesus the Christ died and ressurected heal our dear nation!