Home » Politics » ONDO ASSEMBLY CRISIS: I was ‘impeached’ to cover up fraud of new speaker— Oloyelogun 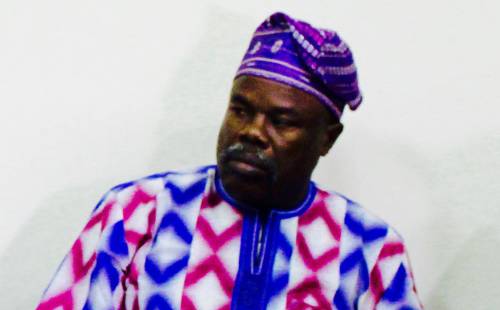 The embattled speaker of the Ondo State House of Assembly, Rt. Hon. Bamidele Oloyelogun who was reportedly impeached last week has alleged that the new speaker “forged” signature of lawmakers to impeach him in order to cover up the fraudulent activities of the latter.

Oloyelogun alongside his deputy, Oladeji Iroju were impeached by the 26-member house of assembly where 18 of the lawmakers signed to their impeachment over grounds of gross misconduct.

However, the former speaker has continued to lay claim of the leadership of the house.

Addressing news men in Akure on Sunday, the embattled speaker said the group of lawmakers that endorsed his impeachment which now has Hon. Olamide George has their speaker did so to cover up his fraudulent act.

“Their purported speaker on the attempted impeachment, Hon. George Olamide, a fraudulent personality who is currently the Vice President of Athletics Federation of Nigeria (AFN) doubles as the member of Ondo State House of Assembly and is being paid for both. He misled the House of Assembly about the true information of his financial rights from AFN.”

“He’s not a patriotic Nigeria as he engages in holding two public offices at the same time. Panels had been raised to check out this before he led this attempted impeachment on the 9th of November, 2018. I guess he did this to cover up his misdeeds. That’s conflict of interest. ”

He insisted that signatures of two of the 18 lawmakers that reportedly signed the impeachment notice were forged.

“They claimed to have formed two-third as a condition to impeach the Speaker and the Deputy speaker, whereas they were less in number as Hon. Sunday Olajide and Hon. Oluyede Olusola were not part of the attempted impeachment”

He continued, “It’s interesting to mention that the fraudulent group has two majority leaders in person of Hon. Araoyinbo Olugbenga Joseph and Hon. Fajolu Abimbola Olutope. With this, they do not have any Deputy Speaker as against their claims. Check today’s National Newspapers.

“All the above are enough evidence to proof to the citizen of Ondo State that these people are not peace loving. They don’t care to put the state in problems just for their personal interests. ”

Meanwhile, the Olamide George-led group has cried out over threat to their life and that of their family members. The lawmakers reportedly boycotted the reconciliation meeting called by the governor and has since moved to Ibadan.

News went out last Friday that the state assembly had impeached its Speaker and Deputy Speaker, a move that reportedly saw men of the National Union of Road Transport Workers (NURTW) invade the assembly complex along Igbatoro road where journalist, staff and lawmakers were beaten.

The lawmakers accused the speaker and his deputy to have expended about N1 billion out of the N1.3 billion budget for the assembly without the approval of the house.