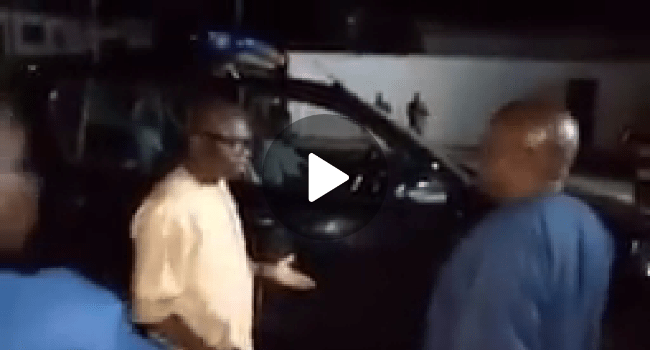 There was a mild drama at the gate of the Ondo State Government House on Saturday night, as the Commissioner of Police in the state, Bolaji Salami, blocked the way of the Deputy governor, Hon Agboola Ajayi, preventing him from leaving the Government House.

The deputy governor was said to be moving his personal belongings out of his official quarters, but was barred by the police commissioner.

Though details are sketchy, a number of videos circulated online showed a vehicle blocking the deputy governor’s way, while he confronted the state’s police commissioner asking him why he chose to join politics, and allowed himself be used in such manner.

It was gathered that the CP’s action may have been directed by the state’s governor, Rotimi Akeredolu, as a way of stopping the deputy governor from decamping to the opposition Peoples Democratic Party (PDP).

The deputy governor had fallen out with his principal, the State governor, over his (deputy governor’s) plans to contest the coming governorship race, which Akeredolu had also shown interest in.

Ajayi, was billed to resign his position, and declare his decampment to the opposition PDP on Sunday at his Kiribo ward in Ese- Ondo council area of the state.

However, speaking on the incident later, Governor Akeredolu denied having a hand in it.

He said the claims that the state Commissioner of Police restrained the Deputy Governor, Hon Agboola Ajayi, from leaving the government house on his directive was a concerted and devious lie meant to discredit him.

A statement by Akeredolu’s Chief Press Secretary, Segun Ajiboye, said the report was a complete falsehood intended to play victim by the principal actors involved.

He explained that it was a time-tested code in government’s business for officials to take inventory of offices and quarters before and after an official is moving in or out of offices or quarters.

Akeredolu said it became worrisome and suspicious when aides of the deputy governor insisted on leaving the premises with items wrapped as late as 11 pm.

The governor said the CP’s intervention was most desirable to restore law and order.

“Governor Akeredolu reiterates his commitment to the rights of all, including the Deputy Governor. But he has a duty to be firm and dispassionate in exercising the roles assigned to him,” he said.