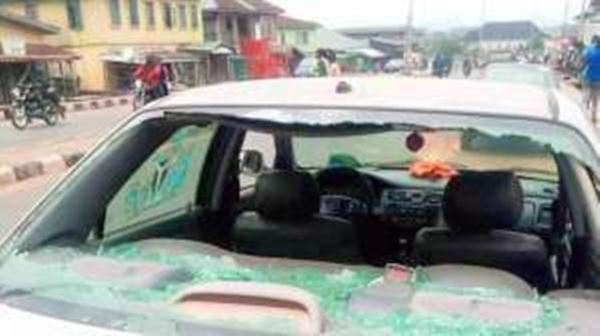 One person is feared dead, five persons injured and a vehicle razed in an attack between supporters of the All Progressives Congress (APC) and the People’s Democratic Party (PDP) in Oba Akoko, Akoko South West Local Government area of Ondo State.

The clash occurred when Governor Oluwarotimi Akeredolu campaign team ran into the campaign train of candidate of the PDP, Eyitayo Jegede, who was in the area for campaign.

Both the PDP and the APC have traded accusations over who was responsible for the attack.

A statement by Head, Media Research, Eyitayo Jegede Campaign Organisation, Mr. Samuel Fasua, said five supporters of the party sustained varying degrees of injuries when the convoy of Governor Akeredolu started attacking the campaign team of Jegede in the area.

Fasua said three vehicles in the convoy of Jegede were damaged while Jegede was held hostage inside the palace of the monarch of Oba-the Oloba, by gun-totting hoodlums suspected to be agents of the Governor.

“In the last five days too, there have been series of attacks on PDP supporters in Aiyede-Ogbese community in Akure North LGA, leading to machete and gun attacks and the burning of at least two houses of PDP members.

“These continued attacks on PDP members by Aketi’s political thugs and shock troops, are no doubt threatening the peace of our dear state.

“We earnestly call on President Muhammadu Buhari and the Inspector-General of Police to urgently wade in, to save the lives of members of the public who are being prevented by the powers-that-be in Ondo State from belonging to political parties of their choice.”

Olatunde said Governor Akeredolu campaign train was going to Ikare-Akoko in continuation of the local government campaign rally when the PDP struck and attacked the convoy of the campaign train.

“The branded campaign vehicle donated to Akeredolu campaign by Ambassador Sola Iji has been set ablaze by the PDP hoodlums.

“The driver of the vehicle sustained bodily injury and now receiving treatment at a government hospital.

The Police Public Relations Officer of the state, Mr Tee-Leo Ikoro, who confirmed the incident said some men of the command had been deployed in the town to calm the situation.