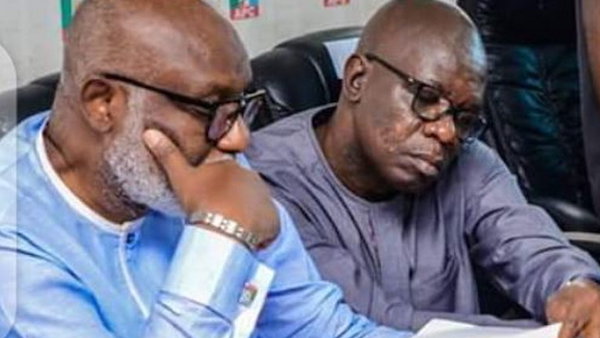 The members of the Ondo State House of Assembly have denied receiving any bribe from the state Governor, Rotimi Akeredolu to impeach his deputy, Agboola Ajayi.

Ajayi, who has been having a running battle with Governor Akeredolu culminating in his defection from the All Progressives Congress (APC) to the Peoples Democratic Party (PDP), had accused Akeredolu of inducing the state lawmakers with N10 million each to impeach him.

Reacting to the allegation, the Chairman, House Committee on Information, Mr Gbenga Omole, described the allegation as a falsehood.

He said: “This allegation smacks of naivety on the part of the deputy governor and intended to cast aspersions on the noble image of members and drag the integrity of the House in the mud.

“It is on this premise that we, honourable members of the Ondo State House of Assembly state unequivocally that this is nothing but a blatant lie and politics taken too far, least expected of the caliber of the deputy governor of the Sunshine State. But we are not surprised because he is a drowning man and he will hold on to anything to survive.

“As lawmakers and elected representatives of the people, we are aware of efforts by Governor Akeredolu to reposition the state and make it enviable among her equals across the country even in the face of obvious dwindling resources.

“Much as we are not ready to trade words with anyone, we are adequately aware of our constitutional rights and would never hesitate to exercise the same when the occasion demands it. We do not need any inducement of whatever kind from any quarters to exercise our constitutional responsibilities as elected representatives of the people.”

Ms Babatayo narrates ordeal in the hands of D’banj, police since speaking out against alleged r*pe