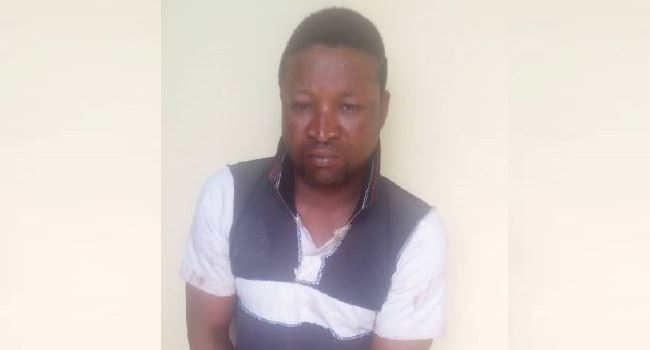 A 35-year-old ex-convict, Emmanuel Joseph, has been arrested by the Ondo State Police Command for allegedly raping and robbing an 80-year-old woman, Alice Mogbonjubola, at her house on Lotogbe Street, Ondo town.

According to the state Police Public Relations Officer, Tee-Leo Ikoro, who confirmed the arrest of Joseph, the suspect had allegedly entered the octogenarian’s compound and pretended to be picking some herbs before he pounced on her and dispossessed the victim of her money and a mobile telephone.

A neighbour of the victim who was one of the first to apprehend the suspect, said he sneaked into the woman’s room through the window and forcefully had intercourse with her after threatening the octogenarian with a dagger.

“The woman was in her room and the suspect came around the house pretending to be picking herbs at the back of the house.

“It was the cry of the woman that attracted the attention of people on the street, who forced the door open, and caught him naked. The people rescued the woman and took the suspect to the police station.”

Joseph who allegedly confessed to the crime during interrogation, said he did not know what came over him that made him to commit the act.

“I didn’t know what I was doing that time. Something would tell me to steal or rape and I would do it. After that, I would blame myself for doing it.

“I don’t know what has come over me. I was just released from prison before the strike by judicial workers because of this bad behaviour. I have been doing it for long.”

Ikoro added that investigation had commenced into the incident and the suspect will be charged to court soon.