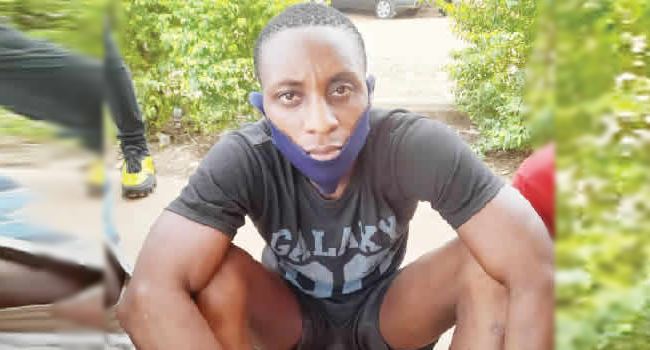 A security guard working at a fuel station in Ondo town, Abiodun Osuntimehin has been arrested by the state police for his alleged involvement in the robbery of the station.

While Abiodun who allegedly orchestrated the robbery attack was arrested, one of the gang members was killed, while the others reportedly escaped with the sum of N2 million.

Parading the suspect, the state Commissioner of Police, Mr Bolaji Salami, said the suspect had confessed to the crime and would be charged to court.

He said, “A security guard was killed and about N2m stolen from the safe, but the good news is that the man behind that dastardly act was immediately nabbed by our detectives, who did not leave any stone unturned to see to his arrest.

“Abiodun Osuntimehin, a guard with same company, was the mastermind behind the act; he has confessed to the crime and will soon be prosecuted.”

The suspect said he regretted his involvement in the crime.

“I now regret the killing of my colleague; I did not share out of the money as the gang ran away with the loot. It was my boss that got me arrested. I knew there would be money at the station that day,” Abiodun stated.