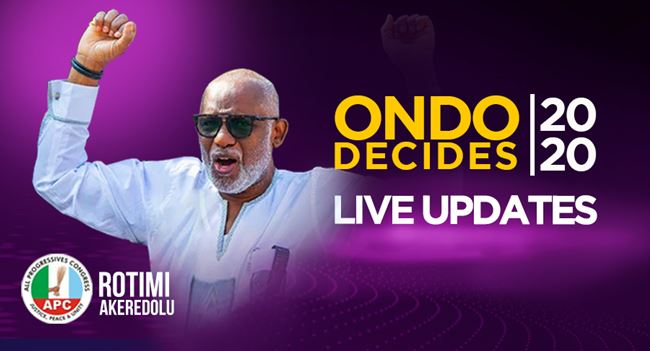 The incumbent Governor of Ondo State, Rotimi Akeredolu has emerged the winner of the just concluded governorship election.

He defeated his closest rivals, Eyitayo Jegede, the candidate of the Peoples Democratic Party (PDP) and Hon Agoola Ajayi of the Zenith Labour Party (ZLP).

Results from 18 Local Government Areas as announced by the Local Government collation officers at the Independent National Electoral Commission’s collation centre in Akure on Sunday revealed that Akeredolu maintained the lead in Saturday’s governorship election in the state.

The Saturday election that saw Akeredolu re-elected as governor was not without some form of violence, as a man simply identified as Gboye was stabbed with a broken bottle in Ward 4 unit 002 in Ijomu/Obanla.

An unidentified man escaped death by the whiskers in Owo area of Ondo State on Saturday after he was caught allegedly asking voters to sell their votes while the Ondo State Police Command also confirmed that there was sporadic shooting at Pollíng Unit 11, Edo Lodge in Oke Ijebu, Akure.

The ZLP candidate, Agboola Ajayi, who cast his vote on Saturday at Apoi Ward II, Unit 4, in the state also alleged security compromise during the governorship election in the state.