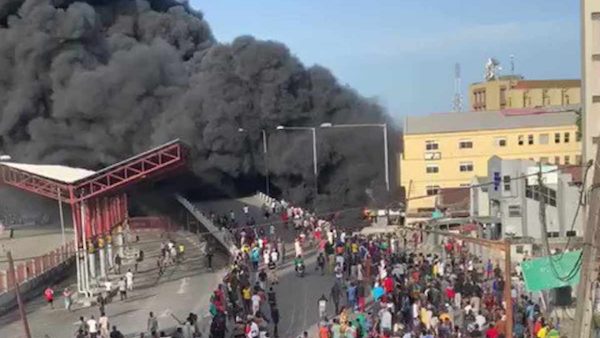 One person was killed and 15 others injured in a fuel tanker fire in Obalende area of Lagos Friday.

The incident occurred when a tanker carrying 45,000 litres of Automotive Gas Oil (AGO) otherwise known as diesel, suddenly caught fire opposite a fuel station at the Obalende roundabout in Lagos Island.

At least 30 vehicles were destroyed earlier in the week when a fuel station went up in flames in the Ifako-Ijaiye area of the state.

The Director-General of the Lagos State Emergency Management Agency (LASEMA), Dr. Femi Oke-Osanyintolu, who confirmed Friday’s incident to journalists, said the situation has been brought under control.

He said: “The agency received a distress call on the above incident concerning a 45, 000-litre capacity tanker loaded with PMS which was set ablaze having fallen on its side directly in front of a petrol station.

“The agency’s officials and men of the Lagos State Fire Service and the Federal Fire Service battled to save the situation from causing extensive damage.

“The tanker, while negotiating a bend in front of Nigeria National Petroleum Corporation (NNPC) fuel station lost control and fell on its side and caught fire.

“One dead, and about 15 people got injured. The fuel station was, however, not affected

“The raging fire was later curtailed and extinguished and surrounding buildings protected from being gutted.”