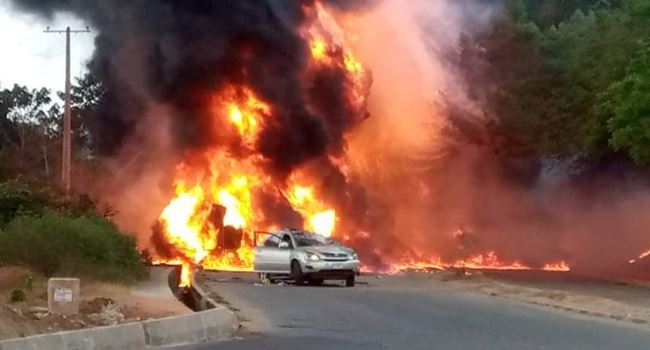 One person was confirmed dead on Tuesday in a fuel tanker explosion in Abeokuta, Ogun State.

An unspecified number of people were injured while several cars and houses were razed in the incident,

The tanker explosion, which occurred at about 8:15 a.m. along the Presidential Boulevard Road in Kuto, Abeokuta, was said to have thrown the area into confusion

Eyewitness told journalists at the scene that the accident occurred when the tanker which carried 33,000 litres of fuel had a brake failure and crashed into the cars before bursting into flames.

According to them, the tanker was coming from Sagamu-Siun-Oke-Mosan Road had climbed the overhead bridge and suddenly lost control while descending from the bridge.

The tanker reportedly hit a motorcycle which was in motion before ramming into some commercial vehicles waiting for passengers at the end of the bridge.

The fire spread to a few offices around the area and caused pandemonium as many motorists tried to escape from the carnage.

‌Some parents whose kids were on their way to schools were also thrown into panic as they rushed to the scene to see if their children were affected in the incident.

‘Don’t be in hurry to form a party like APC,’ PDP counsels Okorocha

Police begins manhunt for suspected killers of officer in Rivers