One feared dead, many injured as BRT collides with Dangote trailer in Lagos | Ripples Nigeria 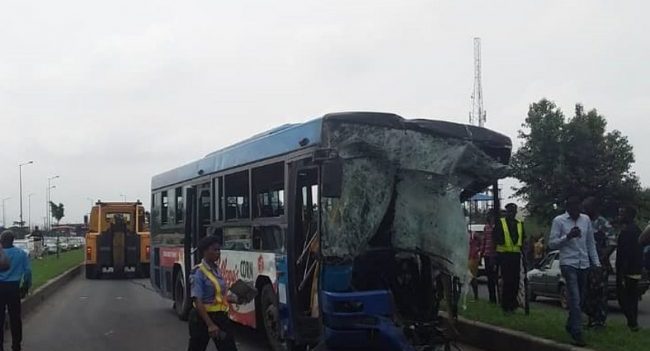 A Lagos State government-owned BRT bus on Tuesday was involved in an accident with a trailer at Ikorodu area of Lagos.

It was gathered that the trailer which some residents of the area identified as belonging to Dangote group, swayed off its track due to a failed break, and collided with the BRT.

The state of the driver of the BRT bus is still unknown as there were conflicting reports, as some said he was dead, and others said he was rushed from the scene of the accident in coma.

An eye witness of the incident, Lateef Shittu, who spoke with our correspondent, said several people were injured in the accident as the BRT bus was fully loaded before the incident.

Another eye witness, Woke Ojabola, said “the accident was too bad. I hope the driver will not die.”

The Lagos State Traffic Management Agency (LASTMA) In a tweet on the incident, said that “Afatal accident occurred at Ikorodu this morning involving a trailer with a BRT bus. The trailer skipped off its lane and colluded with the BRT bus.”

LASTMA also added that “evacuation process had begun in order to ease traffic on the route.”

Meanwhile, heavy traffic is currently recorded on Ikorodu road due the accident.

The Lagos State Police Public Relation Officer, Bala Elkana could not be reached as at press time as his mobile phone number was not reachable.