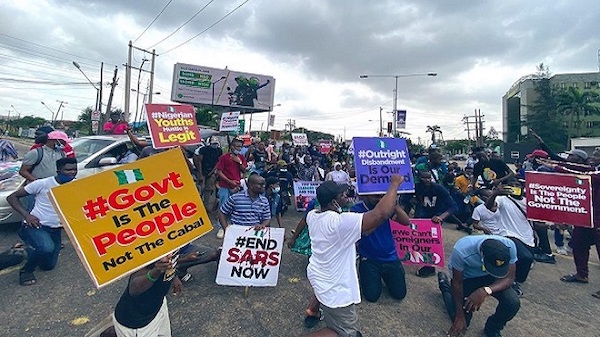 A student was reportedly shot dead on Saturday in Ogbomosho, Oyo State during a clash between #ENDSARS protesters and police operatives.

According to reports, the protest was allegedly hijacked by hoodlums who attempted to free detained suspects at the Owode Ogbomoso Area Command Police station.

The Oyo State Police Command however it shot any protester dead, stating it was forced to use tear gas to disperse the protesters.

Its Public Relations Officer, Olugbenga Fadeyi, said the Command has at different times given a free hand to the protesters across the state and wouldn’t have shot at people.

Reacting to a viral video on the alleged attack on the protesters, Fadeyi, in a statement on Saturday, explained that the protesters were not hindered in any form during the exercise until they (protesters) started throwing stones into the Police premises and attempted to gain entrance into the premises.

Fadeyi said: “The attention of the Commissioner of Police, Oyo State Command, CP. Joe Nwachukwu Enwonwu, has been drawn to the trending story/video that has been widely circulated on Social media today 10/10/2020 that Police killed a protester in Ogbomoso during the “EndSARS” protest.

“The CP wishes to state that the Police allowed the protesters to express their feelings during the protest and they were not hindered in any form until when they started throwing stones into the Police premises and attempted to gain entrance into the premises.

“The Police did not fire a shot or kill any protester as widely circulated.”

Sources however revealed that the shot youth was a student of the Ladoke Akintola University of Technology, (LAUTECH) Ogbomoso.

#ENDSARS: I have no power to control the police, Makinde reacts to death of protester

Poverty, greatest cause of insecurity in Nigeria —Uzodinma