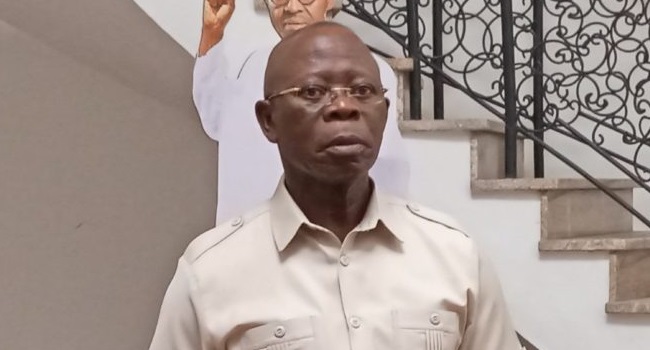 The National Chairman of the All Progressives Congress (APC), Adams Oshiomhole, has advocated for greater roles for the Nigerian military in election monitoring.

Oshiomhole also described those campaigning against the role of the military in elections as enemies of democracy.

The APC chairman, who spoke shortly after voting at his polling unit in Iyamoh, Etsako West Local Government Area of Edo State, also raised concern over alleged invasion of some polling units in the state by suspected thugs.

The polling units, according to him are at Uluoke and Ogbido both in Etsako West Local Government Area of the state.

Oshiomhole alleged that leaders of the Peoples Democratic Party (PDP) brought thugs to disrupt the voting process in the area, adding that security officers had to restore normalcy before voting could continue.

“We have some few reported incidents. you know last week it was clear that the whole of this area was 99 percent APC.

“So I believe PDP leaders sent thugs to cause disruption in the next village where we got 99 per cent during last elections.

“They brought thugs and they started shooting to disrupt the process, unfortunately, the people are determined to vote, and I understand that voting has resumed.

“PDP leaders led the thugs to disrupt election at Uluoke and Ogbido with the same pattern trying to cart away election materials again.

“But the youths in the area stopped them, I understand that the situation is under control in those locations.

“That is why when some people are talking against or disputing the idea of deploying the military for elections, only enemies of democracy and enemies of peace will support that kind of campaign.

“Imagine when just two police men not armed in a polling unit, what can they do when thugs invade the polling centres with sophisticated weapons, they will watch helplessly.

“If not that we have the army that are on patrol, things would have gotten out of hands”, he said.