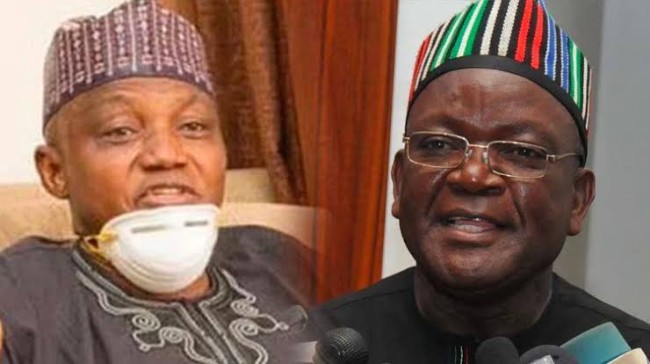 The Benue State government has fired back at Senior Special Assistant on Media and Publicity to President Muhammadu Buhari, Garba Shehu, over the Presidency’s recent attacks on Governor Samuel Ortom.

At a world press conference held at the Government House in Makurdi, the state capital on Friday, the Commissioner for Information, Culture and Tourism, Michael Inelagwu, who spoke on behalf of Ortom, said only deaf and dumb Nigerians like the presidential spokesman still think Buhari has done well as president.

Inelagwu who was responding to Shehu’s criticism of Ortom on Tuesday where he (Shehu) said the Governor was a disaster, called on the President’s media aide to bury his head in shame as majority of Nigerians have been regretting voting for Buhari and the ruling All Progressives Congress (APC).

“Only Nigerians who are deaf like Garba Shehu and those in the Presidency can not hear the cries of citizens who are lamenting the security and economic crisis in the country.

“It will interest Shehu to know that it is not only Governor Samuel Ortom that regrets voting Buhari as President in 2015.

“Majority of Nigerians, including his die-hard supporters in 2015 and 2019 do and it is only those who are deaf, probably like Shehu, that cannot hear the loud cry by Nigerians to be rescued by the PDP from APC’s mismanagement of Nigeria’s political leadership since 2015.

“Nigeria has had enough of failed politicians and will be too glad to see one of them, President Muhammadu Buhari, leave office next year.”

The bone of contention between the Presidency and the Benue State government was stoked when Ortom said a “vast majority of Nigerians are now regretting electing President Muhammadu Buhari and the All Progressives Congress (APC) into power in 2015 and 2019.”

Shortly after signing the State Open Grazing Prohibition and Ranches Establishment Bill into law in Makurdi, the Governor said “Nigerians in every part of the country are now feeling sorry for themselves considering the level of insecurity and biting economic hardship in the country.”

But in response, Shehu, in a interview on Arise TV, had launched a scathing attack of Ortom, saying the Governor should rather be held responsible for the spate of insecurity in the state.

Wike decries loss of revenue due to illegal refineries, pledges to redress challenge