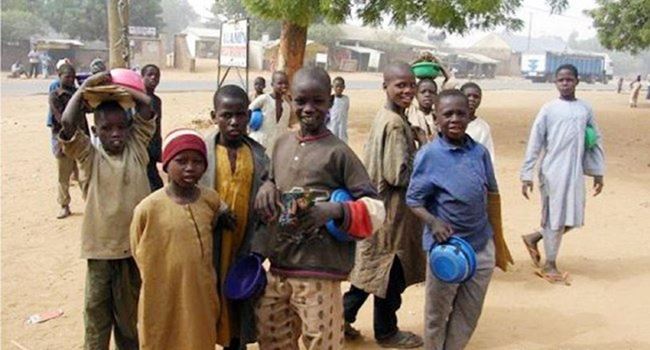 When the knee part of one’s trouser is bedraggled like a clothing snatched from the firm grip of a dog’s teeth, it would be safe to say that all is not well. The same could be said of the elephant in the room; the Almajiri. They swarm the streets of Northern Nigeria like bees on their nuptial flight. Lurking around every nook and cranny you can access, with a bowl in hand and a dejected face waiting for their next gift from above. Once they see you, they buzz after you like a housefly follows dirt, humming whatever comes to their tongue. What they want is simple: survival at all cost.

These armies of little children and teens leave their respective homes and go very far away from where they reside in search of Islamic knowledge but unfortunately end up on the street begging for his daily bread. Yet, more and more of them keep trooping in like aloof sheep on their way to doom without a single one learning from the lesson of another. For some, they can be described as a source of public nuisance embarrassing them by openly requesting for alms. For some, they are seen as an object of pity that the government needs to do something about before it gets out of hand, but for a microscopic few who love to segregate peculiarity of people and places, they are described as the most happening thing in Northern Nigeria. The carking questions are; Are their parents not aware of everything that is happening? Or Do they just not care? Are they happy that it relieves them of their responsibilities? or They truly want these little ones to seek Islamic knowledge at the detriment of their lives?

Before coming up North, I had this derisory meaning of ‘Almajiri’ lodged somewhere within my brain and up until I enlightened myself, I never really knew why these abandoned kids flooded almost everywhere.

The history of the word could be traced back to the pre-colonial era of stories of some prominent northern families who proudly send their wards to cities regarded as bastions of Islamic knowledge at the time in order to seek this knowledge. The welfare of the students and their teachers (Mu’allims) were funded by donations made by the people of the community and these students repaid the favor by handling the community’s labour work.
Then the colonial masters arrived and with them their own brand of education, and like a ruthless tsunami while savoring the gentle feeling of a sweet sail, the almost perfect Almajiri system was destabilized. Western education took charge, the former was cajoled to take a nap and the Mu’allims were pushed out of the system because they lacked proper Western education. With no other means of survival, both the students and their Mu’allims were forced to seek an alternative and in order to save the system then, the Mu’allims imposed a weekly levy ‘Kudin Sati’, to help sustain their families in exchange for the knowledge gotten. But even that became unsustainable. Soon after, feeding became a huge problem, good clothing was worse and they became stripped of their places of shelter. Having no other place to turn to, they became what they are known for today; children beggars.

It is pertinent to note that while the issue of Almajiri is polemical, we cannot deny the fact that it has pose us among other things a number of environmental threats. Not until the outbreak of Corona virus in 2020 did we know that leaving these young ones homeless and uncartered for will backfire at us at the end of the day. There is no single program in Nigeria that is designed to look after their health and that makes them a ready host to transport any transmissible disease.
We integrate them into our daily activities and that makes us stand a chance of receiving pathogenic parasites from them. Then, we go ahead to gift it to those we relate with. If health hazard was the only problem that accompanied this now disputatious system, it may not appear too serious, but when the security of every Nigerian life becomes a big issue because we run an Almajiri system, then I think a big wave of restructuring has to be implemented. These kids leave home at an average age of 3 to 5 years and their upbringing is left in the hands of their Mu’allims.

Even kids brought up with good home training may end up derailing. Then what about those brought up by the streets? Who tells them what’s wrong? Who describes what’s right for them? A reflection on a deeper level makes the situation synonymous to the words of the great Awolowo that said: “The children of the poor you have refused to nurture will never let your own children know peace.”
The colonial masters left us over six decades ago, yet we have refused to recover from the huge blow thrown at us, and when others catechize about what happened to the system, we recite the same story over and over again, which is akin to that of a shabby widow claiming her husband’s death has hindered her from using the bathroom. Whether her husband is dead or not shouldn’t stop her from having her bath. If we wanted to do something about it, we would have done that a long time ago but we continued hiding under the umbrella of what the colonial masters had done. The truth is that everyone complains but no one really cares. No one wants to take responsibility. Actually, no one is expected to since they have parents who have a primary responsibility to bring them up.

Are there no Islamiyyah in their various villages and cities? Must their children go that far to be able to learn the Quran? The Almajiri has provided an avenue for irresponsibility. It has given men and women who carelessly birth an umbrella to hide. The real goal of the system has been adulterated and it has been taken over by those who have a hidden agenda. The aim was to raise well learned clerics but it is has now become a fertile breeding ground of children of peeve and rage that metamorphose and grow up as thieves, beggars and kidnappers. The sad truth about the whole thing is that the whole country bears the consequences of their actions. What’s even more depressing is that the government keeps providing solutions that do not work and with the level of corruption in the country, more than half of any funds allocated for restructuring the system will be embezzled by the hungry politicians.
It is pertinent to etch in our minds that there are over ten million Almajiris walking the streets of Northern Nigeria and this number is expected to rise in the coming years. Now we are here, where do we go? One of the most important steps to address this issue is holistic implementation of the family planning programme. Because if the source cannot be controlled, the problem at hand will continuously escalate. These parents need to be told that people do not just get married to bear offspring that wouldn’t be taken care of but ones that need parental love too and if they have to get Islamic knowledge, they can do that wherever they live.

The ones that left home may not go back and most of them do not even know the way home. Some don’t even know what a home is at all. The best we can do is to go back to the old ways. Let the community keep donating money for their welfare and then they take care of the labour work because whether we like it or not, this problem is ours.
We are the ones being kidnapped. We are the ones being stolen from. We are the ones being killed. We are the ones coming in contact with them everyday. The big men in Abuja don’t. And if we think they would ever do anything meaningful, we would spend a long time thinking. Funny how we do not realize that we give them money almost everyday. How about we do this in a more formal setting? Every community will have an Almajiri committee that receives money daily or weekly and the money will be channeled to their welfare. It’s definitely not as simple as it sounds, but when the risk of not solving our problem outweighs the benefit of doing something about it, no one would remind us to plunge into action. Regardless, we have two options: Brace ourselves up and solve our problem or sit around and wait for the day when these Almajiris outnumbers us all. The choice is ours.