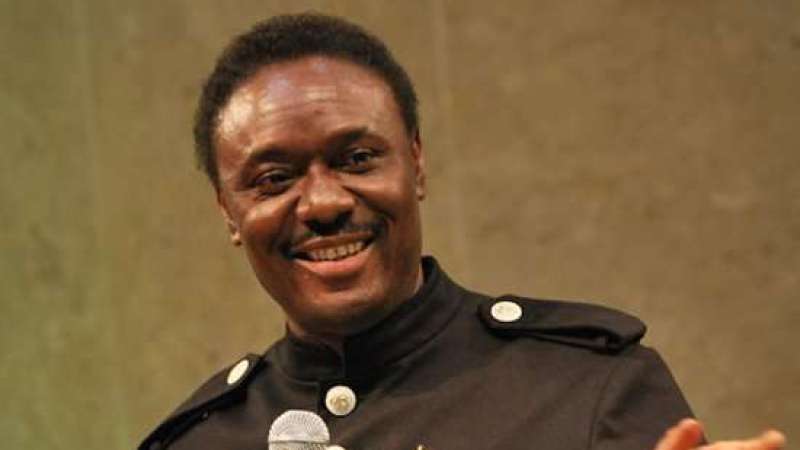 Pastor Christopher Oghenebrorie Okotie, better known as Chris Okotie, is the founder of Household of God Church International Ministries. In 1987 after a thrilling career in music and entertainment he decided to join the growing list of evangelical businessmen otherwise known as “men of God”! He is 63 years old. He is blessed with the power of the tongue. He is highly educated and well travelled. He is a golden boy in the area of church business having ‘graduated’ from the hip-hop entertainment scene. He commands good followership in his church and on the social media. He is sophisticated and urbane having lived all his life in the cities and towns from Benin city to Lagos.

In 2003 he ran for the presidency on a party he founded (Justice Party) claiming he wanted a better society. Defeated but not deterred he hit the political scene again in 2007 contesting for President under the platform of another political party he founded, the Fresh Democratic Party. He harvested failure yet again. Undaunted he tried his presidential luck yet again in 2011 and lost.

Okotie delusionally said that he wanted to be President to make Nigeria better. Like Pastor Tunde Bakare he claimed God had revealed to him His plans for him to become President yet he is not getting any closer to Aso Rock, now or in the future. If really God had wanted Okotie to be President he would have since become one since His prophecies never fail. Spiritual inanity could be blamed for this mundane ambition to be President but ambition is never a crime.

Besides, Nigerians do not want Okotie as President because he is not a professional politician. We know him as a mundane musician who saw evangelical opportunity and exploited it to become rich and popular. If Okotie were to be voted into office as President then what ex-President Francois Hollande of France did during his five-year reign as President would be a child’s play compared to what Okotie would do.

Former President Hollande was an executive philanderer who went into the Elyseé Palace in Paris as a glorified bachelor. He hooked up with Valerie Trierweiler, a woman bearing the name of her former husband even as the First Lady!

In one of the sexual scandals that characterised his presidency Hollande was photographed on the back of a scooter at his mistress’ apartment by a paparazzi and it made headlines all over the world! And ultimately led to the break-up of his relationship with Ms Trierweiler. Exposed he simply went for the charming actress, Julie Gayet, with whom he has since pursued a romantic relationship.

Mr Hollande has never married officially all his adult life. He never married Ms Sengolene Royale, the mother of his four children nor wedded Valerie Trierweiler. Julie Gayet may be happy for now having ‘snatched’ amorous happiness from Valerie. But she could wake up one morning, Gayet, to discover to her chagrin that Hollande has committed yet another ‘sex crime’ by engaging sexually with someone else. A serial heartbreaker the Frenchman is very good at shooting at whatever appears on skirt!

Our point here is that an Okotie presidency (God forbid) would certainly witness love fireworks in Aso Rock. There would be love triangles and scandals that little time would be devoted to presidential duties. Nigeria would be worse rather than better socio-economically and politically in the event of this hair-frying ‘loverboy’ ever electing residence in Aso Villa. At this crucial stage of our national misery Okotie is the least of our preferred candidates for the presidency come 2023.

Lately there was a trending video online where Pastor Okotie was seen castigating and casting aspersions on the late founder of the Synagogue church in Lagos Prophet Temitope Balogun (TB) Joshua. He said that Prophet Joshua was never called by God into the gospel ministry. That he was a ‘magician’ and ‘sorcerer’!

Let us, for purposes of emphasis, quote him verbatim: “What is the truth about TB Joshua? Who was he? Was he a product of Christianity? Or a practitioner of shamanism? Was he a servant of the Lord Jesus? Or some itinerant religious quack?…Was he a true prophet, who was misunderstood? Or a hypocrite masquerading under the habiliment of the Faith?…When God begins a work in scripture, particularly from the Old Testament, he begins with patterns, what we call types, shadows….You say why because the patterns determine the flow of power and authenticity of that enterprise. He is a magician, a sorcerer, and calls himself a prophet”.

Many people must have cringed in stupefied astonishment listening or reading Okotie pouring invectives on the departed great evangelical Synagogue warrior and trying to compare him to the devil. For us Okotie cannot claim to be better than the late Joshua — in every material or spiritual perspective.

Prophet Joshua touched lives in their thousands if not millions around the world winning souls for Jesus the Christ. He was a munificient philanthropist who never tolerated injustice or poverty. He never married twice nor divorced once. He was never involved in any scandal, sexual or fiscal.

He lived a good life and impacted on the present and future generation. While the Okoties of this world were busy riding on their luxurious limousines and living big in paradisiac mansions Joshua was busy feeding the poor, clothing the naked and providing shelter for the abandoned and hopeless. He was busy paying scholarships for the children of the vulnerable indigent members of our society.

READ ALSO: [Opinion] Slapping the hell out of a President!

In one of his hallucinations Pastor Okotie had claimed heretically that all Catholics were pagans and bound for hellfire! Perhaps Okotie, just like the rest of us, Christians, was born a Catholic and baptised by a Priest. And some deluded folks are still flocking to his ‘miracle-less’ church?

Pray, who appointed Okotie as the judge of the whole earth? Or the examiner of the righteousness of Adams? Who made him the arbiter of believers and unbelievers?

We all know Okotie’s antecedents. How many women he had married and divorced! His antecedents speak of the mundane more than the spiritual. Pastor Okotie though married twice, separated from his second wife in June 2012. Since then he is ‘wifeless’.

Perhaps he no longer considers marriage any serious. As a rich handsome Pastor of a new-generation church brimming with young and beautiful damsels Okotie may not be in short supply of hot legs and sound boobs. In his office the unofficial mantra could be: ‘get me the tithe and Eve’!

The lover-boy Pastor once organized a beauty pageant for church members! Okotie is worth millions of Dollars so it is very easy for him to do whatever he fancies with women, politics or even evangelism. Nigeria is a nation where rules and regulations apply only to the poor and the wretched. That is why Bishop David Oyedepo could slap the hell out of a confessed ‘witch for Jesus’ inside his church! That is why you have sexual scandals here and there involving the randy men of God. That is why Apostle Johnson Suleiman could afford to glorify his new acquired private jet courtesy of Coronavirus global pandemic!

The Bible says in 2 Timothy 2: 20-21: “But in a great house there are not only vessels of gold and of silver, but also of wood and of earth; and some to honour and some to dishonor. If a man therefore purge himself from these (Sins), he shall be a vessel unto honour, sanctified, and meet for the master’s use, and prepared unto every good work”.

Between the late Prophet Joshua and Pastor Okotie there is this nauseating judgement of the living against the dead. We believe that judgement belongs to the celestial realm. No man must, therefore, arrogate to himself the power to pass judgement on others, living or dead.

Pastor Okotie must, therefore, save himself the embarrassment associated with his nasty attitude of playing God. No man is perfect including himself. Whether Prophet Joshua was a magician, a sorcerer or Satan himself he must be allowed to rest in peace.

OPINION: Ignore IBB at your own peril

OPINION: The big question – why should I write a Will?