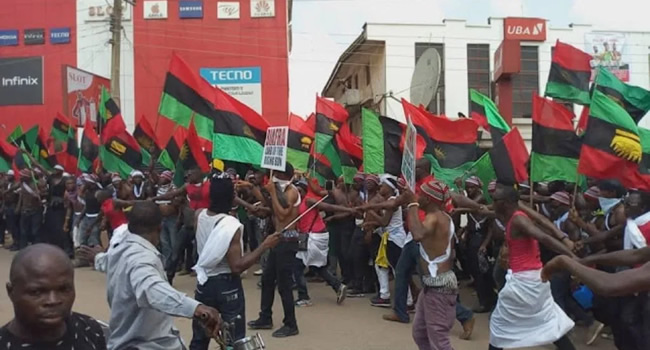 Recently a report online indicated that the Department of State Services (DSS) had arrested three Israelis shooting a documentary in Ogidi town, Idemili North Local Government Area of Anambra State, southeast Nigeria last week. The film-documentary was titled: “We Were Never Lost”. It was exploring the Jewish communities in African countries such as Kenya, Madagascar, Uganda, and Nigeria. According to the ‘Times Of Israel’ newspaper those arrested included Rudy Rochman, a Zionist activist, filmmaker Andrew (Noam) Leibman and Edouard David Benaym.

The report said the crew were detained at a synagogue during Friday night services in the town of Ogidi by the notorious Nigerian secret police, the DSS, and taken to Abuja for interrogation. The trio were accused of coming into contact with the ‘Biafran separatists’! So it is now a ‘crime’ for foreginers to come into contact with the Igbos in their ancestral lands? Visiting them or interacting with them now constitute a crime punishable by intimidation or persecution?

If coming into contact with Igbos now constitute a crime then many northerners (especially Fulanis) ought to be in jail by now for hosting and accommodating foreigners from other countries. The porous borders up north allow Hausa or Fulfude-speaking illegal immigrants to enter the country through the backdoor (sometimes armed and accompanied by horde of cows) yet the DSS had not intervened to arrest or detain anyone.

Even politicians from Niger Republic were hosted during gubernatorial electioneering campaigns in some northern states. When you add the ‘importation’ of foreign voters into the north during general elections to swell the number of votes garnered by northern candidates then you could conclude that Nigeria is meant to work for one region and religion under Buharism.

Last week, upon their arrival from Jerusalem the group had reportedly met with an Igbo leader named Eze Chukwuemeka Eri and presented him with a framed ‘Shiviti’ made in Jerusalem. Again the leader of the filming crew, Rochman, also presented another Igbo community with a ‘Torah’ scroll whose cover was designed by British-Israeli street artist Solomon Souza.

While the Israeli government through the Foreign Ministry had acknowledged the arrest indicating that the Israeli Embassy in Abuja was monitoring and following developments as they unfolded it amounts to state terrorism to harrass and detain foreigners who entered the country with valid documents.

Read also: OPINION: The problem with the Biafra agitation

The families of the detained trio had written officially to the DSS in particular and the Nigerian government in general attesting to the fact that the arrested Israelis were indeed filmakers who were in the country to make a film. They made it clear that they had no connection with the Indigenous People of Biafra and other political or separatist groups in the region.

Historically the Igbos have something culturally in common with the Jews or Israelis. Some even say that the Igbos are the ‘lost’ tribe of Israel! The renditioned and detained Nnamdi Kanu of the IPOB/ESN fame had occasionally told his followers that they belonged to the Jewish large family. He himself, prior to his Kenyan ordeal, had visited Israel regularly sometimes praying in holy places or engaging in other activities.

The Igbos are formidable! If the devil were to have a habitable territory here on earth then one could still find the Igbos doing business and making money and paying taxes to Lucifer! Giving what is due to Caeser and God His due could not be misconstrued as a trait of cupidity.

That is to say that the average Igboman is good at dominating every environment he finds himself, his environment and those of others. Wherever he goes he conquers and ‘rules’. And because of this audacity and intrepidity he is loved by some and hated by others.

You have the best and brightest among the Igbos. But you can also still find the worst among them. Like in every society or ethnic group you can find scammers, drug peddlers, child traffickers and devious businessmen as much as you can find genuine businessmen and decent workers, crafty corrupt politicians and those who leave their mark in terms of service delivery to the led.

The average Igboman could be generous and would do all it takes to build someone into becoming somebody responsible. They have the best apprenticeship mentoring system in the world where the mentor sets up the apprentice after a period of training.

The wealth of the Igbos could be said to have emanated from this mutual generational mentoring and apprenticeship. One big man or self-made millionaire, for example, could mentor millionaires in a space of years of mentorship. There is no other place in Africa or elsewhere where this beneficial system of wealth generation or creation is more pronounced than in Igboland.

That is, you take a little boy, a teenager, from the village, you yourself a product of the same system, and after four or five years of intensive training on business technics under your tutelage the boy is ‘settled’ (send-off) and he becomes independent fending for himself and making money and pursuing happiness. Boys were (and are) made men capable of independent decisions and marital obligations.

After some years managing his life and business concerns he visists his village and takes another relation for the same mentorship he himself had undergone and ‘graduated’ from. And the cycle continues, spreading wealth around and pulling indigent families out of poverty.

But that does not mean that the Igbos are ignorant or averse to education, no! Though many Igbos are good at buying and selling and doing big business you can find a good number of others excelling in every other areas of human endeavours. In the universities across the federation, despite the quota system and federal character regime, the Igbos excel academically. Many graduate annualy in flying colours only to encounter the unemployment market in a country where creating jobs for the teeming youths remains a great challenge to our rudderless leaders.

Nigeria cannot afford the diplomatic or military anger of the Israelis. Arresting or detaining their nationals on flimsy excuses must be condemned and seen as a provocation taken too far. Let those arrested be released forthwith. Even if their mission were to have been to come to help the persecuted Biafrans towards their liberation so be it!

Of course it bears repeating here that the Biafrans were never lost! The Biafrans know where they are coming from and where they are headed. They can never be lost on their way to the promised land. Like them or loathe them greatness is their destiny. Biafra shall be free someday!

OPINION: The Cubana show in Oba —a critical review

OPINION: Why APC politicians are terrified by e-transmission of votes