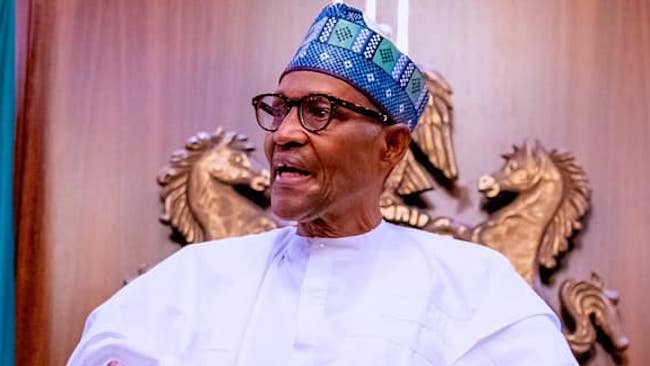 Few weeks ago the Chief Imam of Apo Legislative Quarters Mosque, Sheikh Nuru Khalid, had lambasted President Muhammadu Buhari for his failure to tackle ubiquitous banditry and galloping insecurity across the federation. In a viral video seen online the Imam swore that Allah (God) would deal with the President if he did not return Nigeria “united and without bandits” as he met it. The cleric while addressing worshippers during his Friday sermon said Buhari must ensure that he ended the menace before leaving power in 2023.

Speaking in his native Hausa language Sheikh Khalid asked the worshippers to go “tell the President that there is a country we pay allegiance to, and there is a part of the country we do not know, which is governed by bandits…..the President should either return the country as one nation where bandits are not killing people anyhow — just the way he took over, or Allah (God) will deal with him”.

Imam Nuru made a point. Nigeria has lately become a nation governed by bandits and terrorists! Kidnapping on industrial scale is now the new money-spinning business in town! Abductors are on the rampage kidnapping for ransom. The entire country has turned crimson as professional killers, herdsmen and terrorists sow sorrow, tears and blood.

Even the hitherto impregnable NDA (the Nigeria Defense Academy) in Kaduna was not spared recently as bandits ransacked there killing officers and taking others prisoners. They left with heavy ammunition stolen from the armoury! They met little or no resistance as the operation lasted. They even had the temerity to demand for ransom before releasing the abducted official in their custody.

The Chief Imam of the Apo Mosque was not alone in lamenting the failure of leadership at the centre. About the same period he spoke truth to power the founder of the Living Faith Church Worldwide, otherwise known as Winners Chapel, Bishop David Oyedepo, had hurled insults on those he called ‘Fulani vagabonds’ said to be making life impossible for local people. The intrepid voluminous Bishop was speaking at the first service of his church ending of August at the Faith Tabernacle, Canaanland Ota, Ogun state.

Bishop Oyedepo described President Buhari’s administration as an ‘error’ Nigerians made in 2015 which must not repeat itself come 2023. “For the blood of many that they have wasted, their generations will pay for it” the man of God declared invoking the imminent wrath of God visiting the evil men and women in the land.

And he continued: “If nothing happens, God has not sent me but judgment will be ravaging the land from now. Many will sleep and never wake up. Many will be struck with blindness in 24 hours. Many will be crippled in 3 days. My God is turning the table against the wicked”.

Though we have not seen or heard of any of our oppressors going blind, getting crippled or slept without waking up in the morning the judgement of God is always patient. It could happen at any time or at any place.

It appears lately that majority of Nigerians are agreed that President Buhari’s administration is a disaster for Nigeria. Not one waiting to happen but a disaster that has already happened. Perhaps, except Femi Adesina, Shehu Garba, Lai Mohammed and a host of other die-hard Buharists and Buharideens, the conclusion is already reached without ethnic or religious connotation or colouration that Buhari has almost destroyed Nigeria beyond recognition and redemption.

For the past six years Buhari has become a harbinger of destruction inhibiting everything that aids development of the Nigerian people. Is it in the area of security or division across ethnic or religious lines? Or power generation and distribution? Or welfare of the people and their collective pursuit of happiness? Or the value of the national currency, the Naira? Or the value of our lives, since reduced to the level of those of cows?

Given the generalised degeneration of the governance system voices of opposition are now mounting, some emanating from unfamiliar quarters up north denouncing the lethargy in governance and the poverty, lies and deception. Unfortunately, we have liars and garbages in government in Abuja professionally defending the indefensible.

President Buhari (or the cabal doing the job for him) have positioned professional propagandists who paint black white. What cynics and critics are seeing they claim not to see. But they are meeting their match in the vociferous vibrant opposition, conventional and non-conventional.

Before our very eyes what is unfolding was unimaginable prior to the emergence of the retired General onto the national stage as President. He had campaigned for ‘change’ and restoration of national security and dignity. Alas, what has changed are legion: pauperisation of our people, unemployment, organized looting, corruption, insecurity and creeping tyranny.

President Buhari has literally become an executive bull in a China shop! Care must be taken, therefore, to ease the bull out of the glass-filled shop. Before the deranged bull does further damage to the system men of goodwill, people of good conscience, patriots, elder statesmen capable of removing the beast from the anomalous position it has taken inside the building must unite their efforts to save the shop and the building.

The religious leaders across the country are united in their conclusion that Nigeria under Buharism is sick and dying! A sick country in the hands of a sick man! For Nigeria to survive and make progress then Buharism must ‘die’!

OPINION…2023 presidency: Who will go for us?

OPINION: Notes from Osun at 30