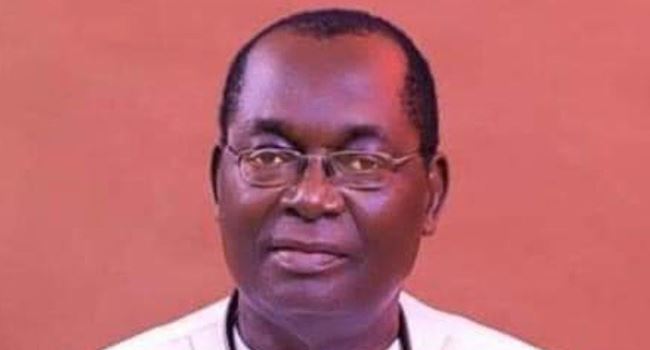 Last week the husband of the late Dora Akunyili, ex-Minister of Information and Communications and former Director-General of the National Agency for Food and Drug Administration and Control (NAFDAC), Dr Chike Akunyili, was gruesomely murdered at Afor-Nkpor in the Idemili North Local Government Area of Anambra state. He had left Onitsha for Enugu after attending a lecture hosted by the University of Nigeria to pay tribute to the late NAFDAC DG. He hailed from the Agulu community in the Anaocha Local Government Area of the state.

As soon as the assassination happened tragically with the news hitting the airwaves and the internet allegations mounted over those behind it and why. Reactions had trailed the brutal assassination from far and near. One of the sons of the deceased hastily took to the social media to blame it on the Indigenous Peoples of Biafra (IPOB). Though he later deleted the post the damage had been done already.

Uche Mefor, the former estranged disciple of the detained IPOB leader, Mazi Nnamdi Kanu, had taken to Facebook to conclude without investigation that IPOB and their notorious military wing, the Eastern Security Network (ESN) were responsible for the murder! While Mefor is entitled to his anti-Kanu/IPOB opinion we hold that he was quick to reach a conclusion.

Following their line of reasoning Chief Joe Igbokwe, the Special Adviser on Drainage and Water Resources to the Lagos State Governor, Babajide Sanwo-Olu, a known IPOB/ESN hater had blamed the Akunyili killing on the Kanu rampaging boys. He accused the South-east elite of keeping complicit mum while the region was being turned into a killing field.

Igbokwe whose country home in Nnewi recently suffered arson orchestrated by the so-called ‘unknown gunmen’ went extreme by calling on the Buhari regime to urgently declare a state of emergency in the entire Biafraland! Igbokwe goofed by advocating for such drastic measure to tame the criminality making life a living hell in Igboland lately.

Pray, are the killings in the south-east worse than what is happening in terms of terrorism, abduction and banditry in the northern regions? Has any northerner ever called for a state of emergency to be imposed on Zamfara, Katsina, Kaduna or Borno states? If a state of emergency should be declared anywhere then the troubled northern states should be where to start.

The IPOB leadership, however, through the official Spokesman, Emma Powerful, had issued a statement denying any IPOB involvement and declaring that some criminals or sponsored rogue elements were committing dastardly acts and blaming them on IPOB. Mr Powerful alleged that those that ‘poisoned’ the courageous adorable Dora must have been behind the recent cruel elimination of her husband.

While we condemn strongly the Akunyili murder we must acknowledge that the south-east region was not this violent or bloody prior to the advent of Buharism. Injustice, inequity and marginalization of the Igbos led us where we find ourselves today. And the gory trend may not end soon unless concerted eforts are made to right the wrongs.

And that brings us to the issue of ‘Ebube-Agu’ and the inexplicable delay in its formation and operational launch. The Biafran version of ‘Amotekun’ in Yorubaland has taken a long time to be formed and made operational. Or do we take it to mean that recruitment into the paramilitary vigilante group has met certain hiccups? That is, folks are reticent and unwilling to be part of the outfit?

Since the ESN are firmly implanted on the ground does it mean then that ‘Ebube-agu’ has become a herculean task for the south-east Governors despite the propaganda and spins? What is making ‘Ebube-agu’ an intractable issue to resolve?

The former Governor of Anambra State and former PDP vice-presidential candidate, Peter Obi, himself from Agulu, had said he was shocked to have discovered the headless bodies of the victims including Dr Akunyili in the mortuary. Were their heads cut off after their deaths? This horrible revelation would make identification of bodies a difficult task, he had argued.

We tend to believe that the late Dr Akunyilu must have been murdered by accident. By having a police man in front of his vehicle he exposed himself to mortal danger. With the gubernatorial poll coming up on the 6th of November in Anambra state the great industrial state is experiencing a whole lot of tension. So Dr Chike must have been inadvertently targetted with his assailants not knowing him. If he was travelling alone with his driver perhaps he would not have been killed.

The gubernatorial poll in Anambra state promises to be a war-like event. Attacks and counter-attacks are daily being reported. The three contending political forces (APGA, PDP, APC) are all prepared for the worst! While rigging may not be completely ruled out the victor may emerge not through the ballot box majority vote but who would unleash more violence or shed more blood!

Since the deceased was not a politician, a land or wife grabber it stands to reason that he must have met his untimely death by accident or circumstances. Unless he was involved in local politics, land dispute or wife-grabbing then we see his elimination as an accidental isolated occurence in a region overtaken by anarchy and chaos.

While we welcome the 20 million Naira bounty placed on any valuable information leading to the apprehension and prosecution of the killer(s) of the late surgeon by the Anambra state government we urge the security agencies to track down the gunmen responsible for not only the killing of Akunyili but many other Nigerians in the south-east.

If this is the way (pure terrorism) Biafra would be established as an independent nation then we are not for it. Count us out of this pervading atmosphere of gun violence. Life ought to be cherished by all and sundry since it remains sacred even in Igboland!

We express our heart-felt condolences to the family and children of Dr Chike Akunyili. May his soul and those of his police orderly and driver rest in peace!