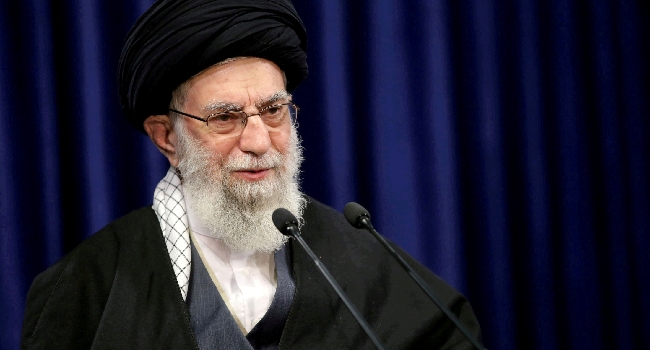 The Islamic Republic of Iran is globally reputed to be a rogue state! Like North Korea she is desperately developing nuclear weapons. While the rest of the civilised world are busy seeking ways to improve humanity amidst climatic, COVID pandemic and social challenges Iran and North Korea are only interested in nuclear armament. While the former concentrates its efforts at becoming a nuclear power (possessing nuke bombs) the latter, despite multiple dissuasive Western sanctions, is trying surreptitiously to arm herself with the big dirty bombs.

Besides, Iran exports terrorism across the borders! She hates Isreal with unqualified passion and the Jewish state equally demonstrates animosity towards her. Over the decades there has been no love lost between the two enemy states. Isreal, like the United States, has publicly vowed never to allow Iran obtain a nuclear weapon.

A theocracy diluted with pseudo democracy Iran is in the news lately for two wrong reasons. One, she was accused of militarily aiding and abetting the Russian widely-condemned invasion of Ukraine. The destructive kamikaze drones that it sold to Russia are being used to destroy cities and towns infrastructurally in Ukraine. Though the Putinic Russia and Iran had both denied it all hard evidence abound of these lethal supplies.

The US Intelligence had revealed that not only were the unmanned suicide drones emanate from Iran some Iranian military agents were positioned on the ground in Crimea helping the Russians strategically launch the drones! Thus far the drones had effectively knocked out power and water supplies rendering life more unbearable for Ukrainians in a war situation.

And secondly, the foundation of the Islamic Republic is being shaken by the spontanous demonstrations in many cities and towns over the activities of the so-called Morality Police. The morality police, formerly known as Gasht-e Ershad (Guidance Patrols), is part of the national police force tasked with ensuring compliance with Iran’s Islamic values, including dress code. It is not clear how many men and women work for the force, but they have access to arms and detention centres as well as what are called ‘re-education centres’ across the country.

At the centre of the popular revolt was the late young Kurdish girl named Mahsa Amini (22). On the 13th of September this year, she was arrested in Tehran for allegedly violating the hijab rules and she died three days later in a coma!

Ms Amini had been detained three days prior by the morality police in the capital city and she fell into a coma after collapsing at a detention centre. There were reports that officers had beaten her with a baton and banged her head against a vehicle! But the infamous morality police authorities had denied she had been mistreated and said she had suffered a heart attack.

Since her untimely demise hundreds of thousands of young Iranians (especially teenaged girls) have taken to the streets defying the omnipotent Mullah ruling the country and shouting death to him! Hundreds among them had been brutally killed and hundreds more wounded. Thousands had been arrested and thrown into prisons.

Extraordinary images of teenage schoolgirls rejecting obligatory headscarves, of women of all ages walking bare-headed in public spaces could be seen on video clips uploaded online.

The popular mantra had been “death to the dictator” and “women, life and freedom”. The uprising is unprecedented in the history of revolutions in Iran. The repression has been brutal and mindless. The Mullahs (led by Ayatollah) are desperate to save the gains of their 1979 revolution.

Iran is led by Ayatollah Ali Khamenei, a dictator who plays god and acts like a King! President Ebrahim (or is it Ibrahim?) Raisi is just there as a glorified civilian cannon fodder. The real power of the state resides with Mullah Khamenei!

Besides, the equivalent of Morality Police exists in northern Nigerian states where Sharia is practised against constitutional provisions. The Sharia law enforcement police called Hisbah have been going about their duty with absolute impunity. Like their lawless counterparts in Iran they are laws unto themselves!

They brutalize and extort and terrorize citizens (especially the ‘infidels’ from the southern parts of the country). Law-abiding folks have had their hairs shaven forcefully and those drinking alcoholic beverages inside bars and restaurants had been brutalized illegally.

Others have had their love lives imperilled by these outlaws. Yet we pretend to operate under a federating nation-state with abiding fundamental laws to which everyone is subject.

Few weeks ago they reportedly confiscated two vehicles loaded with 5,760 cartons of assorted beer on the Kano-Madobi Road. They randomly raid brothels and hotels where prostitutes hibernate yet the customers of the whores are mainly northerners!

The major problem with Islam in Iran, Nigeria and elsewhere is that there is hypocrisy and abuse of faith for some political or percuniary reasons. They pretend to cherish the values of Allah and propagate His messages but we find carnal scoundrels and criminals doing the opposite!

Like Boko Haram and ISWAP criminally advocating for the banning of Western education we see in their armed and violent insurrection an attempt to impose their political and religious will on the rest of us.

Besides, inside the country there is this failure of leadership, devaluation of humanity and accentuated hunger and poverty and corruption tendencies that tend to disfigure the great nation under an underwhelming President.

The Morality Police nonsense in Iran and policing in Nigeria share similar murderous characteristics. Policing Nigeriana has since metamorphosed into a criminal enterprise that sends folks to their untimely graves.

Imposing a dress code on a woman is anachronistic to democratic ethos globally. It runs counter to the fundamental freedoms and rights enshrined in the constitution.

No one has the right to dictate to anyone how they live their lives. Whether they drink beer, make love inside a night club or dance naked ought not to be anyone’s business. How they wear their haircuts or dress should not be anybody’s cup of tea. The ultimate judgement belongs to the Supreme Being — God or Allah!

Between the Morality Police in Iran and the local morality police in northern Nigeria (Hisbah) there is no morality in their conducts. While enforcing morality they themselves are living on an amoral planet fraught with human follies! Brutality, therefore, remains the name of the game!

It is our position that in a democracy inside a Republic (with a liberal secular constitution in force) Sharia law (and Hisbah) is an aberration. The hypocrisy behind it all is revolting and sickening. In the north where sharia law is in full force Governors like Abdullahi Ganduje had been caught stuffing millions of Dollars of kickback inside their ‘babanrigas’! Issues of moral corruption abound!

Up north politicians raid the treasury and fabricate an image of frugality and brotherhood! They use poverty and ignorance (through illiteracy) to keep the ‘talakawas’ busy fending for themselves, eking out a miserable living or begging on the streets.

We express our solidarty to Iranians as they brave the odds to make themselves heard loud and clear. Death to the dictator and women, life and freedom, we concur!

Mullah Ayatollah Ali Khamenei, the so-called Supreme Leader, must die for Iran and Iranians to enjoy unfettered freedom! Muhammadu Buhari must die politically next year for Nigerians to enjoy the resources of the land through the quality delivery of democracy dividends to the people.

May the soul of Miss Mahsa Amini continue resting in peace!